A good cooperation: Rembrandt, The Netherlands and France 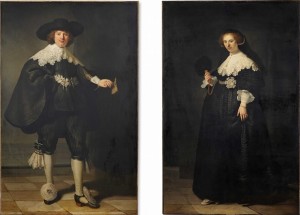 The Netherlands and France will together buy two rare Rembrandts for a total of €160m, the Dutch culture minister has announced on September 29th, after the two countries defused a potential bidding war, according The Guardian information.
The 17th-century paintings, which belong to the Rothschild banking family and have rarely been seen in public, will alternate between the Rijksmuseum in Amsterdam and the Louvre in Paris, Jet Bussemaker (Minister of Education, Culture and Science in the Dutch Government) said in a letter to the Dutch parliament.
“We believe these two rare portraits should always be allowed to be admired together, alternately between the Rijksmuseum and the Louvre, so they are accessible to the broader public, both young and old,” she said, adding that the deal was cemented by Dutch prime minister, Mark Rutte, and the French president, François Hollande, at the United Nations this week.
The two full-length portraits of a young couple – Portrait of Marten Soolmans and Portrait of Oopjen Coppit – were painted by the Dutch master to mark their wedding in 1634. Wrangling over the future of the paintings had threatened to sour relations between the two European allies.
Bussemaker said the Dutch government was willing to stump up half the €160m price tag, with the remaining €80m to be found by the Rijksmuseum. But her French counterpart, Fleur Pellerin, had said the day before that Paris had submitted an offer to acquire one of the portraits for the Louvre, and that the paintings would alternate between the two museums.
After “intensive” discussions with Paris over the last few days, the Dutch cabinet decided to agree with France to share the costs “given our combined interests”, Bussemaker said. The sale’s finer details – including insurance, responsibility for restoration and how the portraits are to be exhibited – still need to be worked out, Bussemaker said.
The marital portraits of Maerten Soolmans and Oopjen Coppit are believed to be in the collection of French banker Eric de Rothschild.
The affluent Dutch couple had themselves individually painted in fine detail by Rembrandt in Amsterdam and through the years the two paintings have always been treated as a single unit, media reports said.
Dressed in black, which was highly fashionable at the time, Soolmans is depicted holding a glove in his left hand, while Coppit holds an ostrich feather fan and wears a four-row pearl necklace among other expensive jewellery.
The paintings have been viewed publicly only once in the past 150 years, and Bussemaker has already stressed the importance of finally putting them on public display.
According to the Dutch daily paper NRC, the paintings were reportedly sold to the Rothschilds in 1877 for 1.5m guilders, despite attempts by the Dutch government at the time to keep them in the Netherlands. The Rothschild family in 2013 first indicated it wanted to sell the paintings, NRC added.
The director of the Rijksmuseum, Wim Pijbes, told Dutch Radio 1 he was satisfied with the deal to share the portraits with the Louvre:“A few months ago it still seemed unthinkable. But now two beautiful portraits will be together in the public domain, in two museums of world fame,” Pijbes said. He added it was a new concept in the museum world for two countries to work together to obtain works from a private collection. Pijbes said each country would own half of each of the two paintings, which were “like a pair of shoes, never to be separated”.