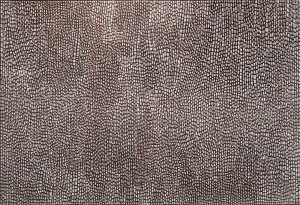 When any compelling new way of picturing the world shivers into being, it can’t help but enthral us. Think what it is like to see the early Cubist paintings by Braque and Picasso, or the very first sensationally realist, shadow-filled paintings of Caravaggio.

Many may see “Everywhen,” a succinct survey of Australian Aboriginal art, now open at the Harvard Art Museums, and feel similarly fascinated and awed.

But does the work in the show present a new way of picturing the world, or rather a vastly ancient one? Both. Aboriginal art has roots in a culture that is tens of thousands of years old, but it didn’t begin to take its prevailing present shape — coloured paints on canvas — until the early 1970s.

That’s when Geoffrey Bardon, a white schoolteacher, encouraged senior Aboriginal men to paint designs they had shown him onto small pieces of hardboard, using cheap but colourful acrylic paint. This occurred at a remote government settlement in the Northern Territory called Papunya.

Once a ration depot, later a Lutheran mission, Papunya was known for its “intensely assimilationist” environment. It was not a happy place. But something extraordinary happened there.

“Everywhen” includes a handful of early Papunya paintings and even earlier works on paper by such artists as Anatjari Tjakamarra, Uta Uta Tjangala, and the brilliant Mick Namarari Tjapaltjarri. In their fusing of rudimentary means with secret, inherited knowledge, there’s something magical about these pieces.

The very act of painting the piece can be thought of as a performance, or the reiteration of a sacred action. That goes also for a lot of the larger, more visually immersive art that flourished in indigenous communities across Australia in subsequent decades — although inevitably (given the intervention of market forces) with diminishing returns.

In this exhibition, in around 70 works, it provides a smooth and enlightening introduction to forms of art celebrated in their home country not only as beautiful, but salvific: the aesthetic equivalent of balm applied to shameful national wounds.

If the elders painting at Papunya were conjuring sacred knowledge, they were also, at times, stretching the rules that governed the dissemination of that knowledge. The quandary about what knowledge should be revealed and what concealed creates a titillating dynamic around the reception of Aboriginal art, one that has long beguiled outsiders. But too much can be made of it.

Aboriginal art is perhaps best thought of as a political expression of cultural identity and resilience, and an ongoing quest for images of concentrated power and beauty.

Individuality, innovation, and authenticity are not concepts that have the same prestige in Aboriginal cultures as they do in the West.

The exhibit’s subtitle, “The Eternal Present in Indigenous Art from Australia,” helps explain the somewhat maladroit title. The suggestion, as the museums’ former director Tom Lentz explains in the catalog’s foreword, is that “for Indigenous Australians, past, present, and future overlap and influence one another in ways that defy Western notions of time as a forward-flying arrow.”

Contemplating this can lead the mind to beautiful places. A cynic — or perhaps merely a sad-eyed realist — might say that the British colonization of Australia two centuries ago sentenced the continent’s indigenous people to an experience of time as circular and overlapping as Dante’s hell.

Disease, slaughter, dispossession, and lack of recourse (thanks in part to the British designation of the continent, which had been occupied for 50,000 years, as “terra nullius” — nobody’s land) almost destroyed Aboriginal culture. It certainly made a mockery of the idea of time as a forward-flying arrow.

Many Aboriginals today — including those from the remote communities where some of the most celebrated art is made — live in conditions that everyone across the political spectrum agrees are a national disgrace.

Art, in such circumstances, should be — and is — a source of pride and hope. But it also carries a heavy and, I would say, an unrealistic burden of expectation.