Delacroix’s distinctiveness was in part due to the circumstances of the time. He was born in 1798 at the end of the French Revolution, the son of Charles-François Delacroix, ambassador to the Netherlands, and Victoire Oeben, the daughter of a celebrated cabinet maker. Since Eugène arrived seven months after Charles had undergone a major testicular operation, his natural father was widely thought to be the éminence grise statesman Charles-Maurice de Talleyrand, a friend of the family and a minister under five successive regimes. Such parentage would perhaps help explain where Delacroix got his patrician airs.

Delacroix entered the studio of the neoclassical painter Pierre-Narcisse Guérin, but the greatest impact on his style came from studying the old masters in the Louvre, in particular Rubens and the Venetians, and from more senior contemporaries such as Antoine-Jean Gros and Théodore Géricault. Taken together these influences gave him an interest in colour, movement, imagination and grand historical and literary topics. This heady hotchpotch was intensified by his adulation for the work of Shakespeare, Walter Scott and Byron – indeed, as an adolescent, Delacroix wrote two historical novellas and a play.

Delacroix’s early manhood coincided with the end of the Napoleonic adventure and the return of the Bourbon monarchy, the unloved dynasty that famously “forgot nothing but learned nothing”. The young painter was faced with the dilemma that so many of his generation had to contend with: how to live a heroic life in an unheroic age. It was the problem that obsessed both Géricault and Stendhal. Delacroix’s response was to turn backwards for his themes but to paint them in a forwards-looking way.

In his first Salon submission, The Barque of Dante (1822), he already showed the characteristics that Baudelaire isolated as defining his art: “the atmosphere of the human drama and the state of the creator’s soul”. It also showed him to be a formidable colourist and theoretician of colour – the water drops on the bodies of the damned souls who menace Dante and Virgil as they cross the Styx are formed of separate touches of green, yellow and red that blend not on the canvas but in the viewer’s eye.

Unlike many of the Romantics, Delacroix actively sought state patronage and acceptance, although the latter was late in coming – he had to apply seven times to join the Académie des Beaux Arts before he was finally accepted. The Barque of Dante was bought by the state, as was Liberty Leading the People (1831). This painting, depicting the July Revolution of 1830 which toppled Charles X and brought the “Bourgeois King” Louis-Philippe to the throne, was the closest Delacroix came to being a painter of modern life. Even here, though, his particular take on the heroic tradition is obvious and it has no room for the ideal. The popular uprising may be a noble moment in history, but the insurgents that follow the lead of Marianne, the French Revolutionary goddess of liberty, are a coarse and ramshackle group. Delacroix felt little sympathy for his fellow citizens (the mob was not his thing and nor were the middle classes with their “wholly new barbarism”). He wrote to his brother, a general, that, while he had not “conquered for the fatherland, he would at least paint for it”.

The picture, which was later returned to him for being “too revolutionary”, was in part an attempt by Delacroix to overcome his true instincts.

The artist did eventually find establishment acceptance. In 1855 he was given a pavilion at the Exposition Universelle and, with the help of his friend the prime minister, Adolphe Thiers, was awarded mythological commissions for various government buildings around Paris. And in the Chapelle des Saints-Anges in Saint Sulpice he painted the last great religious mural cycle in western art, with its key image of Jacob Wrestling the Angel a metaphor for his own artistic struggles. Nevertheless, just as he was not a believer in the modern world, so he was a religious agnostic: what followed life, he believed, was “Night, dreadful night.” 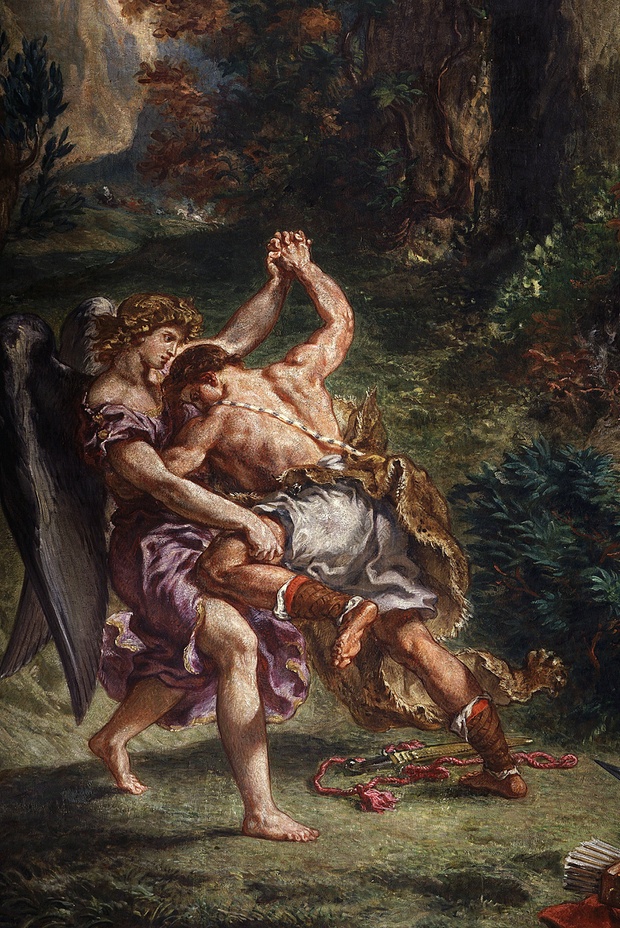 If fellow painters emulated his doubt, his pessimism and his style, where they couldn’t follow him was in his emotional life. Delacroix, said Baudelaire, “was passionately in love with passion” – but not, it seems, in affairs of the heart. He never married, there is no record of love affairs and his closest female companion was his housekeeper. His emotional life, the natural realm for a man of his sensibilities, was a void. It was perhaps in this, the acceptance of his own contradictions, that he was at his most modern.