Guerrero, etchings and the biophormic abstraction 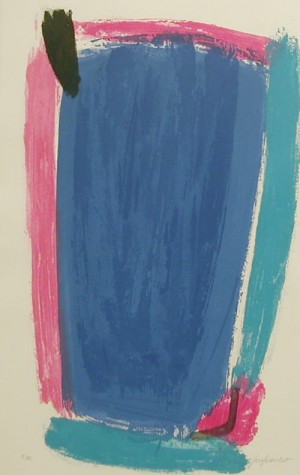 José Guerrero (Granada, 1914-Barcelona, 1991) was a painter and engraver. One of most important events in your life was your “American years“. Effectively, José Guerrero arrived in the USA in November 1949, after marrying the American journalist Roxane Whittier Pollock in Paris. Equipped with his studies at the School of Arts and Trades in Granada, completed after the Spanish Civil War (1936-1939) at the San Fernando Higher School of Fine Arts in Madrid, and the experience of a formative tour through post-war Europe, which allowed him to see in person the work of the great avant-garde masters (Picasso, Matisse, Gris, Miró, Klee,…).

Guerrero came to New York, the new capital of modern art, when the city was dominated by Abstract Expressionism. Despite all he had learned on the Old Continent, he underwent a violent upheaval. As confessed he, “I remember the shock Pollock’s first exhibition caused in me, and the exhibitions kept coming. It was as if I was burning inside. A fire that drove me to paint […]. Every time I saw these works I looked at them with such intensity that I then had to go to a window to see the sky and find something familiar to me there. They were such new works I had never seen anything like them in Europe. I often said to Roxane: ‘I’m going to need five years to get over this change of life, atmosphere and art”.

Prior to this, Guerrero had become familiar with the new values in art and his own work, always hungry for modernity, had moved towards greater figurative refinement and dallied with an incipient abstraction. But there was still a tension between two hard-to-reconcile languages or manners of vision. This tension seemed to be resolved in your work Washerwomen (1950), which Guerrero himself considered the starting point of his great transformation as soon as he reached the USA.

This seminal piece was followed by a number of decidedly abstract works done at the Atelier 17, which William Hayter had moved to New York from Paris in 1940. There, apart from learning engraving techniques, Guerrero made resolute experiments with a formal vocabulary that he could have come to know in Central Europe. Indeed, in the thirties artists such as Hans Arp, Willi Baumeister and particularly Joan Miró (who spent several spells at Atelier 17) popularized what was known as biophormic abstraction, and some years later that poetics had a powerful influence on the early work of artists labeled abstract expressionists, such as Baziotes, De Kooning, Rothko, and others.

In this context, Guerrero took his evolution towards abstraction to its ultimate consequences, as can be seen in the different series of etchings make at this time, which were actually the first pieces he showed (and sold) in the USA. He also painted some canvasses related to them, such as those on loan from the Wright Museum of Art at Beloit College, and several pieces inspired by mural art.

Biophormic abstraction, within whose constraints Guerrero first worked in America (along the three lines -etchings, which he soon abandoned, mural research and painting on canvas), did not strictly imply an absence of the figurative, and therefore acted as a perfect intermediate stage or transitional phase in his work’s evolution.

The etching’s production of José Guerrero will remain, with different intensity, along your artistic life.