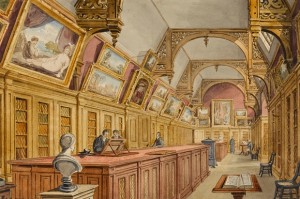 On 4 February, 1816 an Irish peer, Richard, 7th Viscount Fitzwilliam of Merrion, died aged 71 – to the benefit of Cambridge University. He left a fabulous collection of works of art including paintings by Titian and Veronese, wonderful books, illuminated manuscripts, handwritten scores by some of the greatest composers, and £100,000 to found “a good substantial museum”.

That good substantial museum, ‘the Fitzwilliam’,  is now one of the most renowned museums  in the UK, holding half a million works of art and antiquities, and celebrates its 200th birthday this week on the anniversary of his death.

Fitzwilliam was a graduate of Trinity Hall, Cambridge, and his passion for books and music – which may have contributed to his death – can clearly be seen in the museum. However his passion for the beautiful French dancer with whom he had at least three children has only recently been uncovered in research by Lucilla Burn, assistant director.

The last known letter from Anne Bernard, a dancer at the Paris opera known as Mademoiselle Zacharie on stage, was sent in December 1790, when her health was already poor.

Tim Knox, director of the Fitzwilliam, is desperate to know what happened to Bernard: “[Fitzwilliam] leaves France on the eve of the Revolution, never goes back, never marries, and seems to devote most of his last years to pasting his vast collection of old master prints into albums,” he says. “But I yearn to know what happened to her. A grande horizontale, a glorious relic of the ancien régime – did she perish, or transfer her affections to some leading member of the Republic?”

Their two sons, Billy and Fitz, did escape France and Fitzwilliam is believed to have helped many others to leave. Billy may have died young, but Fitz – Henry Fitzwilliam Bernard – and his wife and daughter were with Fitzwilliam when he died, six months after breaking his leg by falling from his library steps. The bulk of his fortune went to a second cousin – George Augustus Herbert, eleventh earl of Pembroke – but Fitz and his family were left annuities for life totalling £2,100 a year, a very handsome allowance.

By 1816 Cambridge University had been, in Knox’s words, “dithering about for years and years” over building a museum to house an ever-expanding collection given by scholars and graduates.

The museum finally opened in 1848, after building work was delayed by the death of the original architect, George Basevi, who fell off the west tower of Ely cathedral while inspecting repairs. Admission has been free from the start – though in its early years the public was only allowed in on certain days and nursemaids with babies and young children were banned. All are now welcome.

Anniversary events will include Death on the Nile, opening on 23 February, based on one of its best-loved collections, the Egyptian coffins donated in 1822. Later in the year there will be an exhibition of illuminated manuscripts including some of the stars of Fitzwilliam’s collection.

There will also be regular harpsichord recitals during the year, celebrating the fact that the museum’s unusual founder was also a highly accomplished performer and composer.