The celebrated American pop artist Ed Ruscha is donating a collection of prints to Tate in what its director, Nicholas Serota, called “a wonderful Christmas present to the whole nation”.

Ruscha will donate 18 recent print editions and has also promised to give one impression of all future prints he creates in his lifetime.

Tate said the gift would allow public museums around the UK to stage exhibitions of the artist’s works on paper.

Serota said: “This is a rare and generous commitment, not to mention a wonderful Christmas present to the whole nation … These works on paper will be a wonderful resource for future exhibitions here in the UK.”

Ruscha, who turns 78 on Wednesday, said: “It is a great honor to know that Tate will be a home to a collection of my editioned works.” 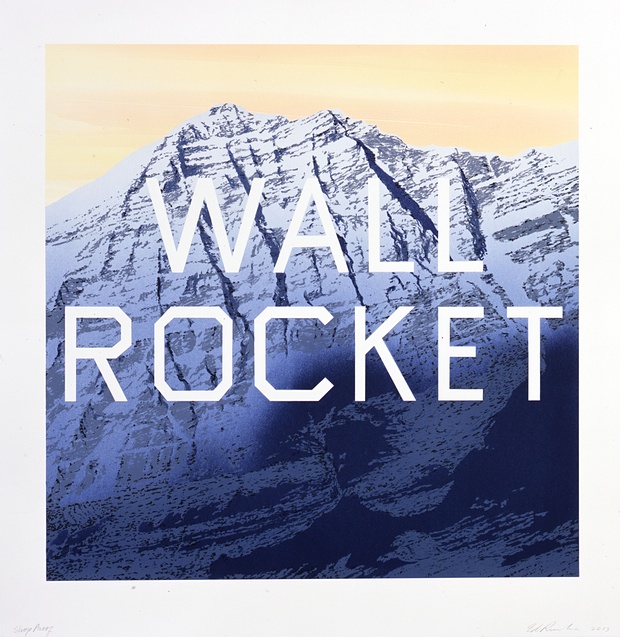 His work hangs in major collections around the world as well as the White House and possibly Downing Street: American President Barack Obama gave British Prime Minister David Cameron a Ruscha print as a diplomatic gift in 2010.

Ruscha was born in Nebraska but moved to Los Angeles in 1956 and has become closely and active associated with this City in a stellar career spanning six decades.

Serota said Ruscha’s work had been much admired in the UK when it was one of the Artist Rooms travelling exhibitions organized by Tate and the National Galleries of Scotland using the collection donated by the dealer Anthony d’Offay.

Tate holds seven paintings, 23 unique works on paper and 111 prints by Ruscha, most of which were part of the d’Offay donation in 2008.

The prints coming to Tate include Jet Baby 2011, an edition of which sold for 30.000 American dollars at Christie’s in New York last year and That Was Then, This Is Now, 2014, after the SE Hinton novel.

It’s really pleasant and excellent good news, it’s really an exciting present, and it’s a concrete example of generosity. This important gift and engagement reinforce the privileged relationships between America and the UK, also in the art domain and reinforce also the position of Tate in the domain of prints. It’s really a very wonderful and appreciate Christmas’ gift for the Tate gallery. Congratulations!

Prints works of Ed Ruscha are present in different Museums and Collection around the World. And, perhaps, it’s interesting to know in this sense that in 2001, the Achenbach Foundation for Graphic Arts, a branch of Fine Arts Museums of San Francisco, acquired the entire archive of Ruscha’s 325 prints and 800 working proofs. The museum bought the archive and negotiated for impressions of future prints for $10 million, with funds provided by San Francisco philanthropist Phyllis Wattis. Another major collection of Ruscha’s print was compiled by the Los Angeles County Museum of Art.

Ruscha is also represented by 33 of his works in the permanent collection of the Museum of Contemporary Art, Los Angeles; the San Francisco Museum of Modern Art owns 25 important Ruscha paintings, works on paper, and photographs; and the Hirshhorn Museum and Sculpture Garden has 21 Ruscha’s in its permanent collection. Private collections holding substantial numbers of Ruscha’s work include the Broad Collection and the UBS Art Collection.