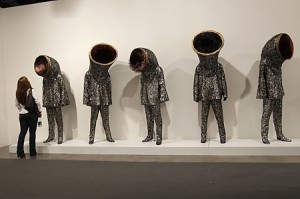 The difficulties faced by non-Western galleries wishing to be represented at international art fairs are a similar vein. Despite the fact that a number of non-Western art fairs have sprung up in recent years, particularly in Singapore, which has seen the founding of the Singapore Art Fair, Affordable Art Fair Singapore, and the more recent Art Stage Singapore, it remains easier for Western galleries to be represented at international art fairs. Lorenzo Rudolf, founder, co-owner, and director of Art Stage Singapore expressed this concern in an interview with AMA: “There are a lot of young, emerging art scenes growing in Asia… We have a lot of galleries that are still young, that are not established enough to compete with Western galleries, but at the same time we have a flood of Western galleries coming to Asia who want to find new Asian artists, and also want to sell these artists here in Asia. Unfortunately, at the end of the day, these Western galleries are more powerful, more professional, and wealthier than the Asian galleries, which mean that the best Asian artists go out to Western galleries.”

It is also the case that if a number of Western galleries are exhibiting at an art fair, it becomes harder for local galleries to present their works. Tamar Yogev and Thomas Grund write in their essay Network Dynamics and Market Structure: The Case of Art Fairs: “Most artists are aware of the link between artistic ‘international style’ and larger opportunities to exhibit abroad, and, hence, deliberately implement international artistic codes in their works, for instance, by using the English language rather than Hebrew.” This suggests, then, that in order to be presented at an ‘international’ fair, an artist’s work must appeal to a Western audience, meaning that some local art may be pushed aside.

Hou Hanru, a Paris-based art critic, curator, and artistic director of the Second Guangzhou Triennial in China, adopts this view: “Along with the boom of events such as biennials all over the world, especially outside the West, contemporary art has gained a totally new position and managed to make itself global. This helps ‘non-Western’ artists become part of the global scene and express their voices. However, an inevitable trend, such as economic globalization, is that similar and sometimes hegemonic norms are being adopted everywhere, and cultural differences are being replaced by a new dynamic of globalization and resistance.”

However, several art fairs have been making a conscious effort to combat these issues, by actively trying to showcase a wide variety of work that reflects the international dimension of the event. For example, the founders of Singapore Art Fair, Laure d’Hauteville and Pascal Odille, aimed to create a fair that would promote artists from the Middle East, northern Africa and South-east Asia.

Lorenzo Rudolf seems to think along similar lines: “We’re putting on a fair that has a really strong Asian identity. Two thirds, three quarters of the content has to be Asian. Sure we also need Western galleries, but it should be a complementary story and not a dominating story,” he told AMA. Similarly, Art15 London, which was founded in 2013, focuses on displaying the works of around 40 lesser-known galleries from all over the world, presenting works from Sub-Saharan Africa, South-east Asia, Central and South America.