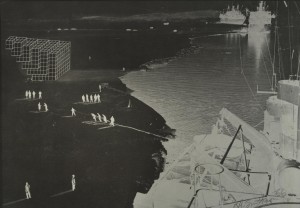 The mad scientist, that enduring cultural archetype, has been with us at least since Victor Frankenstein, in Mary Shelley’s 1818 novel.

Part of the fascination of the exhibition “Past Futures: Fiction, Space Travel, and Postwar Art of the Americas”, at the Bowdoin College Museum of Art at Brunswick (Maine), is to see a related phenomenon: scientifically mad artists. That particular madness can take multiple forms: enthusiastic for, angry about, even a bit deranged by. These painters, designers, and sculptors had their imaginations fired by science rather than deformed by it. But there is a comparable sense of passionate engagement with the technologically possible — and even more, maybe, with the impossible. That engagement produced wary speculations, visionary projects, solid-fuel nightmares in the form of paintings, prints, designs, conceptual projects, photographs, books, magazines.

The exhibition focuses on the first three decades after World War II. That was a time of nuclear anxiety, the Space Race, and technology in the saddle — and of artists at once perplexed, inspired, and repelled by all that that entailed. The contradictoriness of the title “Past Futures” neatly encapsulates this cultural confusion about science as simultaneous liberator and tyrant.

The subject of the show is unusual. Science fiction looms large in film and television of the period. Curator Sarah J. Montross manages to find room for an enchantingly risible poster for a 1960 Mexican film, “Conquistador de la luna (Conqueror of the moon).” Neither science fiction nor science is associated with fine art. Of course redefining what “fine art” meant was central to the achievement of this period, a redefinition we continue to operate under. And thanks to writers such as J. G. Ballard, Brian Aldiss, and Philip K. Dick, science fiction was becoming a very different thing: darker, more searching and sophisticated.

The show’s approach is also unusual. “Past Futures” ignores boundaries geographic as well as thematic and generic. That plural “Americas” in the subtitle tells you that. There are more Latin American artists than ones from the north. Many of their names are unfamiliar. Even ones that aren’t, like Rufino Tamayo and Matta, we see differently. In this context, Matta’s post-Surrealist dreamscapes are as much ripostes to technological threat as cultivation of the unconscious. Tamayo’s very Dubuffet-like lithograph “Lunatic,” in this context, affirms the moony double meaning of its title.

There are artists one might expect. Robert Smithson’s “Proposal for a Monument at Antarctica,” from 1966, has an unnervingly spooky look — and the sense of inhumanity that makes Smithson’s work so unsettling as well as so powerful. Earth art generally might be seen as a response to this sky-high age of science, its response literally grounded.

Another type of response might be formal. It’s striking how many works in “Past Futures” are biomorphic in appearance. Yes, curves and blobs were very much of the postwar era (from Eames chairs to Frank Lloyd Wright’s design for the Guggenheim Museum to kidney-shaped pools). But one wonders if something else was going on: an assertion of organic forms against the hard edges and metallic surfaces of spaceships and theorems.

One of the more impressive things about “Past Futures” is its catholicity. Put another way, the artistic pull of science recognized no categories of style. Besides Surrealism and Earth art, one variously sees bits of Primitivism, Constructivism, Minimalism, and Pop. Style is subordinate, a means to an end (whereas in most art it’s an end unto itself). That end is to make the earthly otherwordly, and/or vice versa. Perhaps the clearest expression of that here — it’s certainly one of the most beautiful — is Nancy Graves’s series “Lithographs Based on Geologic Maps of Lunar Orbiter and Apollo Landing Sites,” from 1972. Could a title be plainer? Yet the artworks are transfixing in appearance, at once indeterminate and precise.