Campus museums and art centers in the USA (1) 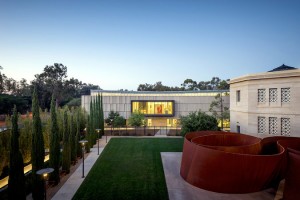 The new Anderson Collection is part of a growing arts district on the Stanford University campus. At right, the Cantor Arts Center.

Closed for six years, the Harvard Art Museums reopen after a radical overhaul by the architect Renzo Piano. Galleries wrap the new public space, but so do a materials lab, an art-conservation suite and a study center, where students, faculty and visitors can learn from the collection of 250,000 objects.

It’s an intricate puzzle piece, serving many agendas, the fruit of a tortured history and about $400 million. The renovation survived the economic crash, when Harvard stopped a billion-dollar lab complex that was to inaugurate a campus expansion in nearby Allston. “We were the only ones to come out of the tunnel,” said Thomas Lentz, the museums’ director.

Such faith in the arts is not confined to Harvard. Elite campuses across the country have emerged from the recession riding a multibillion-dollar wave of architecturally ambitious arts facilities, even as community arts programs struggle against public indifference. The current tide of building developed over years, as universities reassert the essential value of the arts to a well-rounded education, aided by deep-pocket alumni willing to underwrite elaborate new facilities “for noble and not always so noble reasons,” Mr. Lentz said.

Campus museums and arts centers, offering performances and public exhibitions, are intended in part to help schools mend strains with their communities while appealing to students who “expect an advanced university to have an art museum as part of what they offer, especially in a world where the visual is so foregrounded,” Mr. Lentz added.
But the seeming boom also comes at a time of unprecedented criticism of how colleges teach and how they spend money, and amid a push to measure what students learn. “Arts occupy somewhat contested ground at Harvard,” said Mr. Lentz. “They are debated, as is the role of humanities here and everywhere”.

Yale set the bar high in the 1990s with its half-billion-dollar master plan that included renovations and new buildings for art, art history, architecture, music and theater. The capstone was the $135 million overhaul of the Yale University Art Gallery in 2012. Ennead Architects restored and merged three obstreperous buildings of varying ages. The project allowed curators to put so much on view it was as if a great metropolitan art museum had materialized out of thin air. Attendance has doubled to more than 200,000 annual visitors.

Stanford University is building an entire arts district around its Cantor Arts Center to boost the tech haven’s arts bona fides. Along with a concert hall that would be the envy of any big city is the Anderson Collection, a home for a trove of postwar modern and contemporary art that opened in September. Due in 2015 is a new art and art history building with long ribbon like wings for both scholarship and art making, each with its own grand stairway.

The University of Chicago signaled a higher profile for studio art, film, theater and music with the 2012 unveiling of the Reva and David Logan Center for the Arts, designed by Tod Williams and Billie Tsien.

And at Rice University, a leading research institution in Houston, classical singing students will benefit from an anonymous gift that spurred the design of a new opera theater by Diller, Scofidio & Renfro. “They realized that opera -uniting music, theater, scenic design, lighting- is the most truly interdisciplinary art form,” said Charles Renfro, a principal.

Some of these projects have gone through years of struggle that pushed costs to startling heights.

Recently, Princeton University won a long fight to relocate its New Jersey Transit rail station, making its 140,000-square-foot Lewis Center for the Arts a prominent new gateway to the campus. The complex will ease access for arts patrons, but opponents argue it will sacrifice access to the town’s commercial center. Scheduled to open in 2017, the center, by Steven Holl Architects, includes a theater, an art gallery and orchestral rehearsal space. Windowed cutouts in the structure will let passers-by look in on an orchestra practicing or dancers rehearsing. “I hope a molecular biologist passing through might look up from his screen and see something that he becomes interested in,” Mr. Holl said.

Princeton’s arts commitment became a $330 million redevelopment with Mr. Holl’s building and the relocation of the transit hub — a total of 22 acres. But, not everyone is on board. The university is building “a beautification project,” said Stanley N. Katz, the director of Princeton’s Center for Arts and Cultural Policy Studies. “So far as I can tell, the expansion contributes in only modest ways to the intellectual mission of the university.” The prominent refocusing on arts is to some extent lip service, Mr. Katz added. “Arts appeal to certain wealthy alumni who are more likely to give money to this sort of thing than something else.” For his part, Princeton’s president, Christopher Eisgruber, argues that the alumni and campus community “believe we must make it possible for the human spirit to soar.”