Campus museums and art centers in the USA (2) 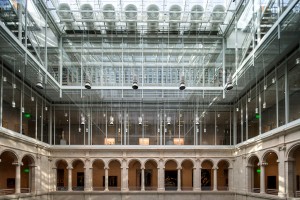 At Harvard, Mr. Lentz, a scholar of ancient and Islamic art and a longtime museum administrator, arrived in 2003 believing that his biggest job would be to unite three museums: the Fogg (Western art), the Sackler (Asian, Islamic and Indian) and the Busch-Reisinger (German and northern European) on Quincy Street, each a fief occupying its own building. Instead, he found that “we had to rebuild not just collections but connections to the university.” Aside from facilities “that were crumbling,” Mr. Lentz said, “there had been a disconnect from the rest of the university. Very few students using the museum were from Harvard. We had to reposition the museum to a more central position with an educational mission, to be a bigger part of the cognitive life of the university, or we would have no traction at all.” Mr. Piano had produced designs for new construction beginning in 1997, but the economic contraction cost Mr. Lentz a proposed contemporary-art building on Harvard’s Allston campus and 30 percent of his staff. As he consolidated the three museums in the tight Quincy Street site, though, Mr. Lentz said he was able to “migrate works from all the collections throughout the building.”

Vigilant neighbors pushed to keep the additions to the site invisible. After accommodating space for object study, curatorial programs and art conservation, Mr. Lentz was able to add only 12,000 square feet for exhibitions, increasing to just 43,000 square feet. That allows display of only a sliver of a collection comparable in size to those of the Art Institute of Chicago and the Philadelphia Museum of Art. Three Harvard presidents have remained steadfast to the art-museum vision, assisted by gifts that have raised $237 million of a $250 million fund-raising goal from major benefactors like David Rockefeller and Emily Rauh Pulitzer.

By contrast, many public institutions are struggling to do more with less. James Martin, who teaches music at the private Millsaps College in Jackson, Miss., and has taught at the state’s public colleges as well, said that the public schools “are trying to get their culture offerings up to speed, but they are hard to fund.” Too much focus on “a very specialized trade-school mentality” cost state schools promising students, he said. “Convincing the public to support arts is difficult in a state where there aren’t enough quality public-school programs for reading, let alone teaching music.”

Virginia Commonwealth University, in Richmond, is that rare public research institution that has put the arts front and center. It hired Mr. Holl to design a 41,000-square-foot building for a new Institute of Contemporary Art that will extend an arts-led downtown revitalization. Mr. Holl anchors the museum with a 72-foot-high torqued metal tower as a billboard for art. A tall glass-walled entrance invites visitors to a forum within for public events. Art for art’s sake is not discouraged, but departments collaborate in an entrepreneurial spirit: Engineering students sought out artists to improve the appeal of devices they had designed. The university drew attention when a student who graduates with a degree in sculpture designed molds of silicon and foam that a university pediatric plastic surgeon used to reconstruct torsos for conjoined twins. Critics have argued that big arts-building investments are vanity projects, or that private donors should finance community arts organizations or scholarships instead.

The University of Chicago wants it both ways. For the Logan Center, the architects provided two entrances, one that opened north to the campus and another facing south, toward poor neighborhoods which had long felt ignored. The university also named Theaster Gates, the Chicago-based artist with an urban focus, as the director of its Arts and Public Life Initiative. The university helped him renovate a nearby abandoned commercial building into the Washington Park Arts Incubator, which displays the work of local artists and offers residencies. “The incubator is really about what could grow in Washington Park,” Mr. Gates explained via email, adding that it works synergistically with the Logan. Performances and displays of a 1960s Black Arts collective called Africobra, for example, were shared by the center and the incubator, as well as the South Side Community Art Center and the DuSable Museum of African American History. He added, “We’ve been able to create the kind of cultural wealth that hasn’t been seen on the South Side in a long time.”

As recession-strapped universities began to regard their art collections as sources of ready cash that could boost sagging endowments, integrating arts education with other disciplines became a necessity. The outcry over the proposed sale of works from the Rose Museum of Art at Brandeis University in 2009 “raised red flags” about the need to make art more essential to the academic mission, according to Lisa Freiman, the director of Virginia Commonwealth’s Institute of Contemporary Art.

At Harvard, where scholars once ran the museums for other scholars, Mr. Lentz proudly notes that with the new study center, 12 classes have already signed on to study with objects that relate to classwork. Arts will always fight the “alphanumeric bias,” Mr. Lentz said. For many in and out of academia, “if it is not text and not a number it is not considered knowledge.” But the debates over how to balance the needs of scholars, students, the larger campus and the community, he said, “have driven arts to greater prominence.”