Cathedrals of Culture: the souls of buildings 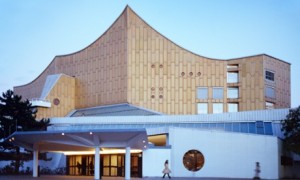 Oliver Wainwright writes (in “The Guardian”, on 25 September 2014) if buildings could speak, what would they say? They would purr poetic platitudes and whisper clichés into your ear, according to Wim Wenders and the team responsible for “Cathedrals of Culture“, a new 3-hour marathon film that aims to uncover “the soul of buildings,” but which feels more like a series of vapid promotional videos.

Several years in the making, the film is the product of six acclaimed directors, each of whom have chosen a different major building to put on the psychiatrist’s couch and delve deep into its subconscious. From the Berlin Philharmonic to the Centre Pompidou in Paris, the half-hour shorts explore a day in the life of these cultural machines, narrated by the imagined voices of the buildings themselves. It is a voyeur’s dream, taking you behind the scenes after hours and from behind closed doors, in a format that puts the architecture – usually just a filmic backdrop – centre-stage.

Shot entirely in 3D, the project is partly intended as a manifesto for the medium, which Wenders insists has not seen its potential fully exploited, confined to action films and special effects. Since his maiden voyage with the technology in 2011 for Pina, a biopic on the avant-garde dance of Pina Bausch, he has been its biggest advocate, for the sense of “heightened immersion” and “real spatial experience” he claims it can allow. Visitors to the 2010 Venice Architecture Biennale will have had a taste of his ambitions, in the form of his short film on Japanese practice Sanaa’s undulating university campus at EPFL, Lausanne, a surreal affair that featured the architects zooming around their futuristic creation on Segways.

“In the realm of the documentary, 3D represents an enormous step forward,” writes Wenders in the film’s production notes, “and could really push the entire genre to a whole new level.” So, with Cathedrals of Culture, has this new level been reached?

Sadly, the answer is a resounding no. In the majority of the films, the medium trumps the message, as directors desperately set up shots that maximize depth of field and jump between extreme close-ups and agoraphobic expanses, but which do little to assist their narratives. There are clever visual tricks for sure, but ones that ignore the fact that there is actually a story to tell and an audience to engage – for 165 minutes, which feels like an eternity, as architectural ennui descends all too quickly.

On the plus side is the choice of buildings, which set up a promising premise, if only for the chance to see these majestic spaces on the big screen. They include the glacial Oslo Opera House, a white mountain of a building that tumbles into the sea, and the dusty 19th-century halls of the National Library of Russia in St Petersburg. There is Louis Kahn’s sun-soaked Salk Institute in La Jolla, California, and Norway’s Halden Prison, a sprawling high-security complex set in a charming sylvan glade.

The latter is the stand-out highlight. Directed by Danish film-maker Michael Madsen, who made Into Eternity, a brilliant documentary on the strange story of Finland’s Onkalo nuclear waste facility, it is a moving portrait of life inside “the most humane prison in the world.” It is a place where wardens glide along corridors on trendy micro-scooters, where every cell has a flat screen TV and en-suite bathroom, and which has the overall look of a Scandinavian boutique hotel. But it is a utopian image – reported with glee around the world – offset by a haunting voiceover, told by the prison’s own psychologist that gives a more balanced view of life inside. The use of fluid free-floating camerawork, meanwhile, intentionally jars with the prisoners’ captivity. Architecture, says Madsen, is “psychology as space,” and his film couldn’t do a better job of showing it.

Cathedrals of Culture present a limited and internalized view of what architecture is, a fault perhaps driven by the obsession with the 3D camera. It is a tool that, rather than broadening the view, has brought a compressive, myopic lens. The context of most of these buildings is entirely absent, as is the bigger story about how they operate in the city. Instead, it is an indulgent, naval-gazing exercise in spatial pornography, choosing visual titillation over giving the full picture. And if the grandiose pronouncements of architects sometimes make you suspicious of architectural culture to begin with, this film will do little to help. It has a self-satisfied, sometimes cultish, air that makes you feel like you’re taking part in some collective brainwashing exercise.