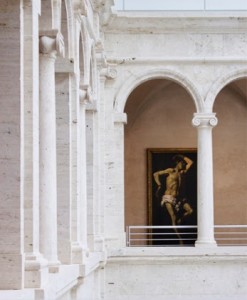 Harvard has everything: a faculty packed with Nobel’s Prizes, the world’s largest private library system, an alumnus in the White House, and an endowment larger than most countries’ GDP. But for the past six years it has had to make do without a place to display its art. The oldest university in the United States has been undertaking a major reorganization of its museums, fusing three independent institutions into a single, major new home. It wasn’t easy, but after years of designs and delays, it’s done.

The new Harvard art museums – with a deliberately plural name, and comprising the main Fogg museum; the Busch-Reisinger museum, focused on Germanic art and the Arthur M Sackler museum, an Asian arts institution – are now housed in a single, 240,000-square foot facility, with double the space of the previous buildings, plus theaters, seminar rooms, study centers and teaching galleries. At the top, under massive skylights, are three gleaming new conversation studios with copious natural light and enviable views of the Boston skyline.

Harvard has been home to an art museum since the late 19th century. But its cramped quarters and awkward divisions for Asian and Germanic art meant that it never achieved the stature of other great university museums: those of Smith, Oberlin, UCLA and especially Yale. Uniting the museums in one building, and reorganizing their curatorial structure along the way, makes a very positive change. About 2,000 works are on view from the 250,000-strong collection, and dialogues among the formerly soloed institutions – a Louise Bourgeois among ancient marbles, or a Gerhard Richter from the Busch-Reisinger collection alongside extraordinary Fluxus works on paper from the Fogg collection – make the place feel almost like a new museum.

The architect of this new building is Renzo Piano, who has built two dozen art galleries now, including 14 in America alone. In the last decade he has inaugurated new homes for Astrup Fearnley Museet in Oslo and the Nasher Sculpture Center in Dallas, while the Art Institute of Chicago, the Morgan Library in New York and the Kimbell Museum in Fort Worth have also been Pianoized with new glass canopies, elevated courtyards, light-modulating roofs. Just over the Charles, Piano’s firm undertook a sensitive expansion of the Isabella Stewart Gardner Museum.

Harvard is one of his better projects, perhaps because he faced serious constraints. The red-brick entrance to the Fogg Museum, on Quincy Street facing Harvard Yard, is landmarked. Piano has maintained that as well as the Fogg’s Mediterranean-style central courtyard – but he’s chopped off its old roof and extended the space by several stories, cladding the upper floors with glass and flooding the atrium with light.

The old courtyard remains the hub of the museum. It’s like a city square, which you traverse multiple times throughout your visit, and which you gaze down on from the floors above. But everything else has been taken apart and put back together. The three museums own their devoted sectors of the building, but they blend into one another so seamlessly that they’re barely distinct. In the same way the galleries ringing the courtyard have no single entrance, but rather multiple ways in. A bold Max Beckmann triptych peeks out of one door, a portrait of George Washington from another. The curators’ narrative is open-ended and exploratory, oriented away from showcasing masterpiece and more towards modest but ingenious surprises. It’s a teaching museum rather than a temple.

The inaugural special exhibition, of murals by Mark Rothko, is a model of what Harvard – and museums of this size and caliber – should be doing. Rothko produced five murals (actually six; he abandoned the last) for a Harvard building project in 1961–62. They’ve since faded, but Rothko’s strategy of staining untreated canvas meant that conservators couldn’t repaint the works without ruining them. Instead, working with colleagues at MIT Media Lab, the curators and conservators produced a painstaking, pixel-by-pixel digital corrective, projected on to the canvases to compensate for the color loss. In the dim galleries the projections are unobtrusive, and suddenly you see Rothko as you never have before – but all you have to do is throw a piece of paper between the wall and the projector to peek at the unrestored paintings. It’s a bold proposition and unforgettable aesthetic experience. This is just what Harvard should be doing: exhibitions that engage the brain as much as the eye.