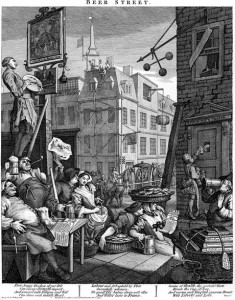 Stand at the east end of London’s Oxford Street, look east and you will see the site of William Hogarth’s most famous picture – Gin Lane. In 1751, when Hogarth made the print, this neighbourhood was a rundown slum, prey to the evils of drink, particularly gin.

The horrific 1734 crime of Judith Dufour – the Londoner who strangled her two-year-old and sold his clothes to buy gin – was still strong in the popular memory. Hence the drunk mother in the picture, carelessly dropping her child into the drain. The pawnbrokers, gin distillers and undertakers (all depicted, too) did a roaring trade.

Hogarth, who died 250 years ago, in Leicester Square aged 66, did the picture in support of the 1751 Gin Act, banning unlicensed gin merchants. It shows an important, understated characteristic of Hogarth’s work: his moralising side.

His most famous pictures – including Marriage A-la-Mode, on the perils of marrying for money, A Rake’s Progress and A Harlot’s Progress – end up with selfishness being punished. The rake ends up mad, in Bedlam Hospital; the harlot dies of venereal disease.

Still, Hogarth is no sanctimonious prude. Some 18th-century buyers of his prints certainly bought them as cautionary tales. His 1747 Industry and Idleness prints – in which the industrious apprentice becomes Lord Mayor of London, while the idle apprentice is executed at Tyburn – were particularly popular among employers.

These days, though, you look at those morality tales and you don’t feel chastened – you smile. The reason why Hogarth’s name lives on is not thanks to his moralising, but because of his wit, and his skill at capturing the British character at its bawdy, drunken, pleasure-loving best and worst; at its most Hogarthian. Can there be any higher honour than to have an adjective named after you? I can’t think of any other British artist with the same claim to fame.

Hogarth said he was keener on drawing character than caricature. And it is character that leaps out of his portraits – like pudgy, scruffy Captain Coram, who set up the Foundling Hospital, which Hogarth generously supported; or The Shrimp Girl, the delightfully jolly Cockney, Eliza Doolittle before her time. Hogarth’s picture of the six servants in his household is a study in British – and human – character: from the half-terrified innocence of the houseboy, to the nervy prettiness of the bonneted maids, to the grizzled dignity of the older men who worked for him.

There isn’t a hint of snobbishness – there is as much warm sympathy in the pictures of his servants and The Shrimp Girl, as there is in the portrait of Captain Coram, the gazillionaire philanthropist. And, when Hogarth gets the knives out, he’s just as vicious in lampooning syphilitic Viscount Squanderfield in Marriage A-la-Mode as he is with the dead-drunk baby-killer in Gin Lane.

When it came to painting down-and-out London, he knew whereof he spoke. Hogarth was a canny businessman and did well out of his art; the £200 fee for his 1746 picture of David Garrick as Richard III broke the record for an English portrait. But he was born into relative poverty: his father, a Latin master, was jailed in Fleet Prison for debt, after he opened a Latin-speaking coffee house in Clerkenwell – a crackpot scheme, even then.

You could call Hogarth the father of the modern cartoon – and the modern comic, too. Those picture series, like Marriage A-la-Mode and the rake’s and harlot’s progresses, are really strip cartoons, if brilliantly executed ones.

The political cartoonist Martin Rowson hailed Hogarth as the father of his profession. The truth of it is that Hogarth wasn’t that good at the typical political cartoon. His South Sea Bubble cartoon and a famous 1762 one – The Times, attacking William Pitt and defending George III and the Earl of Bute, then Prime Minister – are just a bit too hard to follow.

When it came to the biting political cartoon, Hogarth’s successors – James Gillray, George Cruikshank and Thomas Rowlandson – were far more scathing, and graphic. Hogarth is closer in spirit to modern cartoonists who nail the general human condition, rather than skewer particular politicians.

You can’t put Hogarth in the first rank of European painters. Compare his formal oil paintings with Rembrandt’s late work and there is a yawning gulf. Where Hogarth isn’t allowed to show his wit, warmth or sharper side, his paintings fall a little flat, as they do in his Biblical scenes in St Bartholomew’s Hospital and the Foundling Hospital. He was much happier parodying the Old Masters – Dürer’s pictures of the Virgin and the Passion lie behind A Harlot’s Progress – than being one.

That, in itself, is an archetypally British characteristic: the desire to make a joke, to be liked or to tease, rather than be considered earnest or vain. It is a characteristic that is the enemy of the greatest art; but it is the friend of laughter and 250 years of affection.