In Barcelona, Picasso Museum focuses on Dalí and hidden works of the blue period 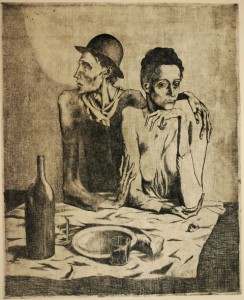 “What saw the light, in the end, was the result of the findings that I discarded”, said Pablo Picasso about his creative process. The Picasso Museum will kick off the year by diving into five works from his Blue Period that hide another beneath, in a seminar on restoration and preventive preservation titled “The Blue Period: new interpretations by means of technical studies.” “The blue period may not be so blue”, said Bernardo Laniado-Romero, Museum Director, on the nuances that discoveries made in recent years bring to the uniformity of Picasso’s Blue Period.

During the early years of the 20th century, between Barcelona and Paris, Picasso was short of money. He often began a painting, then abandoned it –or couldn’t sell it– and began another by painting over it. This has meant that recent years have produced some juicy discoveries. What the technicians of the Picasso Museum found beneath the painting “Terrats de Barcelona” (”Barcelona Rooftops”) was made public in the temporary exhibition Journey Through the Blue: ‘Life’–they found a pair related with this masterpiece of the Blue Period, shown at the Cleveland Art Museum.

Besides Reyes Jimenez, head of the department of preventive conservation and restoration of the Picasso Museum, four restoration experts from North American museums will participate in the 30 January seminar. Ann Hoenigswald, from the National Gallery in Washington DC, will talk about the investigation, which is probably the most exciting aspect of the seminar. Before painting “La tragèdia” (The Tragedy) (1903), Picasso used the same board on three occasions: in 1899 he made sketches on it, in 1901 he painted a bullfight with vibrant colors –an arch of the bullring is visible–, and finally, a scene similar to a drawing of the same epoch, also with a bullfighting theme, titled “El arrastre” (“The Dragging”).

The discovery by the Guggenheim in New York that Julie Barten will speak about happened in two stages. In 1989 it was discovered that beneath “Woman Ironing” there was a portrait of a man. The recent cleaning of the painting not only allowed rosy tones to appear in a painting that was grayish until then, but also made it possible to see more clearly the figure of a man with a mustache and a red kerchief at his neck that is apparently standing before a painter’s easel. After the restoration process, the experts no longer regard “Woman Ironing” as a work fully of the Blue Period, but rather a transitional piece to his Rose Period.

“The blue room”, property of the Phillips Collection in Washington, where preservation expert Patricia Favero is from, hides another anonymous character, in this case a bearded man wearing a jacket and bow tie, with his head resting on his right hand. The results of the analysis concluded that the tones of this man are similar to the painting that he hid. The goal of these studies is to analyze in depth Picasso’s materials and working methods, so as to understand the works to the last detail and thus contribute to their long-term preservation.

Technical studies of “The Old Blind Guitarist” (1903-1904), painted in Barcelona and kept at the Art Institute of Chicago, confirmed that Picasso obtained the tones so characteristic of this piece by mixing industrial and oil paint, as the artist behind Guernica explained in a letter. The experts also found another image beneath, featuring a woman seated with her arms open– similar to “Blue Nude”, shown in the Picasso Museum and also linked to “Life”–, a nursing child, another female head, an ox, and a calf.

The highlight of this year from the exhibition point of view will be Picasso/Dalí, Dalí/Picasso. It will be at the Dalí Museum in St. Petersburg, Florida, until 16 February, and will open to the public in Barcelona on 20 March. Due to the public expectations that it has generated, as it is the first exhibition to address the relationship between the two geniuses, the gallery’s budget for this year will be 100,000 euros higher than last year: it will rise to 8.6 million euros. Barcelona City Hall will maintain its usual contribution of 750,000 euros.

Picasso/Dalí, Dalí/Picasso, curated by the Head Curator of the Dalí Museum in St. Petersburg, William Jeffett, and until 2013 also by Juan José Lahuerta, currently Head of Collections of MNAC, and organized with the collaboration of the Gala-Salvador Dalí Foundation, will include close to 80 works, the majority of them paintings, and thirty documents. The works come from 25 museums and private collections both national and international; some of them have seldom been exhibited publicly. The exhibition will also include a foreword about the public perception of Dalí and Picasso in the city from their presence in exhibitions and in art criticism.

Bernardo Laniado Romero did not want to reveal the new elements that Picasso/Dalí, Dalí/Picasso will have in Barcelona with respect to Florida, but he did explain the main points of the tour: the first contacts between the two artists in the 1920s and 30s– Picasso helped Dalí financially when he was preparing for his trip to the United States–, surrealism, the portrayal of the Spanish Civil War, and the impact that Velázquez had on their art.