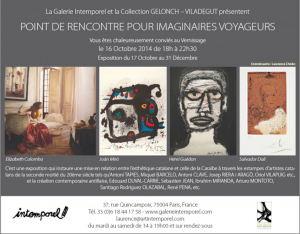 From October 17th to December 31th this year, you could visit in gallery l’Intemporel in Paris an exhibition named: “Meeting place for wandering imaginaries”. It’s the result of a mixed work between the Gelonch Viladegut Collection and this art’s gallery. The goal is to present Catalan artists of the second half of the 20th century and contemporary Caribbean artists together.

As wrote by the Cuba curator Yolanda Wood in the introduction text for the electronic catalog “the wondrous mystery of a trip creates the so-awaited possibility of a meeting point where a trajectory ends, and a fruitful dialogue begins with the unknown, thus revealing a roadmap to paths to come. Case in point, the city of Paris which, as the years passed, became such a focal point, allowing all possibilities of relationships, specifically for the artistic world, as this is where the most creative and fascinating exchanges were initiated. Paris is a city beyond time and it does make sense that there exists an Art Gallery whose name perfectly defines that intent: “Intemporel”. In that space of “artistic intemporality”, artists from different origins and cultural experiences meet together, and it is precisely there that will take place an exhibition where everyone will have the opportunity to appreciate the scope of creativity itself.

Both artists and art pieces bring forth what can be called « wandering imaginaries »: coming to a meeting point. The exhibit will take place in this aesthetic realm that functions with its own temporal codes. It facilitates the discovery of an unusual dialogue, but so necessary to our contemporary society, that brings together the distinct Caribbean and Catalonian discourses, both Mediterranean in that they come from countries surrounded by the ocean, in the midst of the earth. On one side, an American discourse, even though recognized as specifically Caribbean; on the other, a legendary Europe brimming with its own past and present History. Thus, an exhibition out of the ordinary that does not attempt to accentuate the differences had born out of that geography, but on the contrary endeavors to present each artist’s individuality along with what is intrinsic to art: the universality of artistic emotion. The pieces being exhibited cover a vast period of time and a field of references that is even larger. Through them, multiple impressions and reflections are intertwined and so, as they are placed in relationship, they go beyond their original context creating an art space that escapes any specific rooting, becomes international, comes and goes around. It is in that perspective that this exhibit is a must, becoming a nexus beyond schools, trends and styles, but still does not pretend to be an argument to federate nor discriminate art pieces. Therefore, here you will meet artists who were born before and after the second half of the 20th century, art pieces that are posterior and more recent ones, masters, recognized artists and emergent ones. This exhibition offers to better understand what is specific to each artist: their imaginaries, all of them wandering artists on this particular circumstance.

Indeed, there is a divergence between the means and the languages at hand: a collection of engravings with mixed techniques representing Catalonia thanks to emblematic artists of last century such as Miró, Dali and Tàpies, facing the pieces usually found at Intemporel Gallery. This fracture in Art History through the diverse figures and styles exposed in this show, can be viewed as a tribute of sort reaching beyond critical distanciation between those who were not yet present when others were, and those who are here today while others are not any more. This dimension that bypasses time and space, allows the actualization of a discourse that abolishes hierarchies and reveals the awesome transversality of the art world, as it puts forth creators with different means of expression, whether from continental Europe or from the Caribbean islands.
In doing so, the peripheral lines of a dominant cultural mapping that wrote Art History with self-assurance and authority, are redrawn.

Through its diversity, the exhibit unveils the emotional switch that occurred in art in order to open the way for contemporary art, following the second half of the 20th century, when Miró, Dali and Tàpies were the most prominent creators and advocates. Surrealism as much as abstraction were central to the art new directions, in the very heart of the symbolic power centers and peripheral spaces, witnessing the historic-artistic shift in the creative process; such was the case in the Caribbean, whether the artists lived in their own native land or in the diasporas“.

If you are in Paris or if you move to Paris, this is a great opportunity to discover a complementary worlds. Tout est dit.