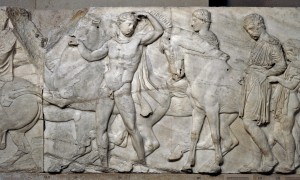 Some of the “marbles” from the Parthenon, usually housed in their own gallery in the British Museum, are currently taking a starring role in an exhibition, Defining Beauty, at the same institution. Seeing them removed from their familiar surroundings and placed among other masterpieces of antique statuary has a curious effect on the eye and mind.

It is possible to see them afresh: and they are revealed as, truly, miracles of sculpture. The artist, perhaps working from original designs by the great Pheidias, seems capable of expressing the motion of water, even of air, in hard stone. The musculature of Ilissos, the river god who once adorned the Parthenon’s west pediment, strains and relaxes as he heaves himself on to his riverbank, his penis resting on his thigh. These sculptures are utterly desirable objects. Their beauty is godlike.

These are more than masterpieces, though: the status of these particular sculptures surpasses that of all the other great objects from the classical Greek world that are scattered in museum collections across the globe. They have become symbolic of Greek nationhood, identity and history, a freighting so heavy that it sometimes seems to threaten to crush the delicate carving of the objects themselves. And, since the Greek actor and politician Melina Mercouri ignited the issue in the 1980s, the Greek political desire to restore the sculptures to Athens has been unwavering.

Now, a new chapter in the struggle for restitution has opened: yesterday Nikos Xydakis, the Greek culture minister, ruled out pursuing restitution through the international courts, despite the previous government’s hiring of a high-profile legal team from London’s Doughty Street Chambers – QCs including Geoffrey Robertson, Norman Palmer, and Amal Clooney.

“The road to reclaiming the return of the sculptures is diplomatic and political,” Xydakis said. “You can’t go to trial on every issue, and in international courts the outcome is uncertain, things are not so easy.”

He was speaking 48 hours after his government had received a 148-page dossier from Robertson’s team describing a “now or never” opportunity for Greece and advising it to take the British Museum to the International Court of Justice. However, the argument over the rightful ownership of the sculptures will not simply vanish: the war of the marbles will continue by other means. “Low-key persistent work” was what was needed, according to Xydakis.

This spring the trustees of the British Museum knocked back a proposal by the Greek government that a mediation process, run by UNESCO, be embarked upon to decide the future of those of the Parthenon sculptures that are held by the British Museum.

In a letter to Unesco, dated 26 March 2015, the trustees declared that the case of the Elgin marbles did not fall within the scope of the United Nations’ cultural organisation’s role as safeguarder of endangered cultural heritage and thus they “decided respectfully to decline this request”.

The enormous emotional significance and national symbolism attached to the sculptures is of relatively recent date – and certainly would have been alien to the Athenians who built the great temple to their goddess atop the ashes of its predecessor, burned by an Persian invading army in 480BC.

The Greeks of the 5th century BC were not united by statehood or geographical unity; they were a people scattered across islands and shorelines from Asia Minor to the Black Sea to Marseille, a collection of quarrelsome, independent, politically heterogeneous city-states united by language, custom, religion, and, briefly and partially, by enmity to the aggressive Persian empire to their east. The sculptures have accrued layers of meaning over time – layers that it is now impossible, even if it were desirable, to scrape away.

In Athens, the argument seems obvious: bring them home to the Acropolis Museum, where about a third of the Parthenon sculptures already reside, and allow them fully to tell the story of that astonishing temple, built by a war-ravaged, victorious city state.

Lord Elgin, it is argued, who was British ambassador to the Ottoman court in Istanbul in the early 19th century, acquired the sculptures through an agreement of dubious legitimacy; and now that a beautiful new museum has been built to showcase the history of the Acropolis, the case for bringing them home is unarguable.

In London, the trustees of the British Museum argue that the sculptures were legally acquired and that they play a public role, in the context of a universal museum, in telling a story about global history and culture – one that they can tell only by being seen in the context of artefacts from other continents and other times.

They also point out that while the British Museum holds about a third of the surviving Parthenon sculptures, a third are on display in the Acropolis Museum and another third scattered about Europe from the Louvre to the Munich Glyptothek.

Today’s urgent challenge, according to the British Museum, is to allow the sculptures to be discovered and appreciated not just in Greece and Great Britain but around the world: hence the loan, last year, of Ilissos the river god to the Hermitage in St Petersburg.

The arguments are finely balanced. The war of the marbles shows every sign of rumbling forward, insolubly, into the future.