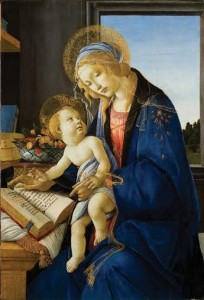 “Picturing Mary” is the most ambitious exhibition mounted by the National Museum of Women in the Arts in years, and given its subject — images of the Virgin Mary — it is likely to be one of its most popular as well. It includes more than 60 works, some of them by the most celebrated artists of the Renaissance and baroque eras, including Michelangelo, Botticelli, Caravaggio and Dürer. If this show doesn’t fill the museum’s galleries with throngs of visitors, nothing will.

The subject is vast, and doing it justice in one exhibition is impossible. One might organize such a show based on the archetypal narrative moments in Mary’s life — the Annunciation, the Pieta, the Assumption — that have inspired artists for centuries. Indeed, one might organize an exhibition around any single one of those archetypes, and still the amount of material would be overwhelmingly huge.

Guest curator Monsignor Timothy Verdon, who is director of the Museo dell’Opera del Duomo in Florence, has chosen to focus the show into chapters exploring different aspects of Mary’s identity and her relationship to Christianity. One section focuses on Mary as mother and woman, another on her presentiments of grief and the loss of her child, another on “Mary as Idea,” and yet another is devoted to the use and appropriation of Mary in religious practice. The exhibition also devotes substantial attention to images of Mary made by female artists, and so there are works by well-known figures, such as Artemisia Gentileschi and Sofonisba Anguissola, and lesser names, including several large works by the mid-17th-century painter Orsola Maddalena Caccia.

Inevitably, it is a show defined by highlights rather than an overarching thesis, although Verdon has been careful to underscore one of the essential and most salient changes¬ in Marian iconography: Her emergence as a fully human figure, beginning about the end of the 14th century. Before that, artists drew primarily on long-standing early Christian and Byzantine traditions that represented Mary as regal and formal, sealed up in her glory and perfection. Mary was also adopted by emerging European royal courts as an icon of queenly power, and a convenient way to conflate images of divine and human authority. A good deal of the old Byzantine formality lingers in a work by Nardo di Cione and a striking two-tiered painting on gold ground by Francescuccio Ghissi, in which the dead Christ looks down upon an adoration of the infant Jesus, with Mary in a sumptuous blue robe.

But by the middle of the 15th century, Mary emerged as a far more emotionally complex figure, a mother playfully teasing her baby, a haunted woman seemingly unable to look away from the suffering she knows will befall her child. One delight of the exhibition is the pairing of a painting by Cosmè Tura, borrowed from the National Gallery of Art, with a terra-cotta figure attributed to Tura, borrowed from the Grimaldi Fava Collection. Both depict an adolescent girl with slender, long hands, delicately touching her fingers together in a gesture that isn’t quite hands joined in prayer but rather a spontaneous expression of delight as she looks at the baby sleeping between her legs. It’s rare to see a painting and terra-cotta of the same subject made at roughly the same time; if both are indeed by the same artist, he clearly understood the power of the image he had crafted.

A curious tension prevails throughout the exhibition, between weaker paintings that are nonetheless curious and interesting, and stunning works that arrest the visitor and overwhelm everything around them.

The highlights are too many to enumerate — the Botticelli is a perfect beauty, a small Mantegna is haunting and an Annuciation by Lorenzo di Credi surprisingly powerful — and almost all of the second-tier works interesting enough to merit inclusion. .

“Picturing Mary: Woman, Mother, Idea” is on view at the National Museum of Women in the Arts until April 12. For more information, visit www.nmwa.org.