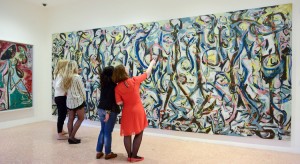 Jackson Pollock’s “Mural” on display at the Peggy Guggenheim Collection in Venice. Credit Casey Kelbaugh for The New York Times

Roberta Smith wrote in “The New York Times, on May 7, 2015, that “Jackson Pollock’s ‘Mural’: Energy Made Visible” “at the Peggy Guggenheim Collection in the Venice Biennale is a small show built around a leviathan. “Mural” is the 20-foot-wide breakthrough painting that resulted in 1943 when Guggenheim commissioned Pollock to make a painting for a wall in her New York townhouse. And because she gave the work to the University of Iowa Museum of Art in 1948, it has been seen elsewhere infrequently, which makes it one of the least familiar landmarks of 20th-century painting.

“Mural” was Pollock’s first really big painting, one of the biggest he would ever make. Its size, abstractness and rolling, all-over composition set the stage for his later work — though he would take a few years to fully absorb its implications — and has influenced generations of artists.

The work has never been in Italy; this is also one of its first showings since the recent completion of its cleaning, conducted over 18 months at the Getty Conservation Institute in Los Angeles. The process seems to have brought more loft and airiness to its brushwork — a combination of scythe-like long strokes and curling commas — and more punch to its palette of black and white highlighted by jewel-bright yellows, magentas and blues.

The rooms of the slightly bunkeresque palazzo on the Grand Canal where Guggenheim lived, and that now houses her collection, are neither large nor high-ceilinged. This forces an intimacy that supports the Abstract Expressionists’ belief that their paintings were big but meant to be experienced up close.

David Anfam, a specialist in Abstract Expressionism and a senior consulting curator at the Clyfford Still Museum in Denver, organized the show with the Iowa museum and gives a fascinating account of its making in the catalog, including the influence of motion photography on Pollock’s technique. Here, he has grouped “Mural” with works by Robert Motherwell, David Smith and Lee Krasner as well as several Pollocks that Guggenheim kept.

A few inches away hangs “The Moon Woman”, an intoxicating work from 1942 that features mythic symbols and emphasizes the dark pinks and turquoise blues of its giant neighbor. Across the way is “Alchemy,” an early drip painting from 1946, also recently cleaned, in which the flung paint has a brittle, straight-line velocity that Mr. Anfam relates to photographs of antiaircraft fire taken during World War II. Closer in spirit to “Mural” are two other 1946 canvases, “Eyes in the Heat” and “Croak Movement,” where the drip process seems buried within unruly textures, yearning to be free.

In the catalog, Mr. Anfam likens “Mural” to Picasso’s “Les Demoiselles d’Avignon” as an explosive work in which you can feel history shifting gears. Whether this is entirely true, it is true enough. Pollock’s leviathan noisily announces the arrival of an artistic potential of unknown extent. It is astounding to encounter it here, more than 70 years on, as if in someone’s living room.