Pop to Popism review – shock and social critique, with an Australian thread 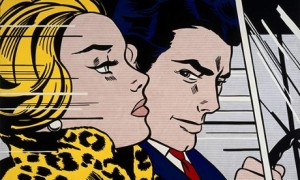 Art movements are strange things: some are decreed by way of a manifesto, their antecedents declared and a purpose proposed. Others are made retrospectively, with entire historical periods yoked under a name that the artists involved never heard themselves, their work understood as part of a historical sweep regardless of individual inspirations or intentions. Either way, the naming and creation of art movements remains mysterious – who is in? Who is out? When did it start – and end?

Pop-art was a movement that had no central manifesto but even in its infancy was acutely self-aware, born of a postwar media culture and the slow evolution of an underground queer aesthetic into a mainstream sense of irony. Its deep roots lay in the avant-garde of the early 20th century, pop inheriting the dada and surrealist tactics of shock and social critique, mixed with an unabashed love of selectively appropriated pop culture icons and an experimentation with new media of the day. Pop artists revamped those old strategies with new subjects and techniques, quickly eliminating the trace of the artist’s hand in the artwork in favor of the look of a mass-produced object.

Pop-art grew outwards from a number of origin points in the late 1940s and early 50s. By the mid-60s pop had matured into a monster encompassing not just art but also music, film, fashion, design and politics, going well beyond Europe and the US into Australia, Japan and Brazil, among other outposts. Over the next decade, pop split in different directions including psychedelic and conceptual art, film and video, performance and theatre before mutating once more into what is loosely called postmodernism. Indeed, so vast and influential was pop that making sense of it now ends up sounding like a description of the last 60 years of mainstream western visual culture.

“Pop to Popism” –in the Art Gallery of NSW’s (Sidney)– is an exhibition with the almost impossible task of describing that trajectory. Curated by Wayne Tunnicliffe and assisted by Anneke Jaspers, the show was conceived as a way of putting Australian art from the gallery’s permanent collection into an international context, drawing examples from 49 Australian and international collections, a rare and welcome example of what an Australian museum can do with resources, space and time. And it works brilliantly.

“Pop to Popism” has its crowd-pleasing stars. Key works by early English pop pioneers hang alongside major early 60s pieces by their spiritual cousins in the US. English pop at the beginning of the 1960s was painterly with a graphic edge – David Hockney’s The Second Marriage (1963) and Peter Blake’s Self-Portrait with Badges (1961) are the link from a more orthodox figurative painting into the highly stylised work both would later produce. By contrast, Andy Warhol’s Triple Elvis (1963) and Roy Lichtenstein’s Kitchen Range (1961-62) are prototypes for the screened and mass-produced work of the next decade.

But where “Pop to Popism” is different to your average blockbuster is the Australian art that has been interwoven into that familiar story. In the early galleries alongside we find the works of Tony Tuckson, an abstract expressionist experimenting with found objects, and the collaborative paintings of Mike Brown, Ross Crothall and Colin Lanceley, with their funky, colorful assemblages that echoed early pop but also French New Realism. While early pop was forming, Australian artists were there at the heart of it.

By the mid- to late-60s, Australian pop-art is seen in full flower in the paintings, sculptures, posters and collages of Richard Larter, Peter Kingston, Vivienne Binns, Peter Powditch, Martin Sharp, Gareth Sansom, Dick Watkins and Bridgid McLean, among many others. And the work compares very well – albeit on the more modest scale typical of most Australian art – but where radical isolation breeds exotic local variations, Australian pop was far looser, funnier and more satirical than its uptight international brethren.

Where pop began as a shared aesthetic rather than as a formal movement, the end point of the AGNSW’s exhibition is centered on a manifesto written by the late Australian curator and publisher Paul Taylor for Popism, the exhibition that was held at the National Gallery of Victoria in 1982. Taylor’s claim was that Australian art was essentially derivative and unoriginal – or ab-original as he coined it – and was thus perfectly situated to describe and celebrate the postmodern era. Pop to Popism contains works by mid-80s Australian artists Peter Tyndall, Richard Dunn, Howard Arkley, Imants Tillers, Juan Davila and Maria Kozic – all included in Taylor’s nascent movement – alongside work by the US artists Jeff Koons, Richard Prince, Cindy Sherman, Barbara Kruger and the collaborations of Warhol and Jean-Michel Basquiat.

Pop was reborn in China in the 1990s and Australian artists such as Richard Bell use its style and ironies in a pointed satire of the art world today. In a much wider sense, street art is the true heir to the pop art kingdom with perhaps more than a dozen young painters working in Australia alone attempting to restore its legacy. There hasn’t been a major show of pop art in Australia since 1984 so this exhibition comes as a timely reminder, not only of pop’s continuing historical importance, but also for its effect on the art of now, and most likely, the future too. More importantly perhaps, is the realization that Australian art has a part to play in that story.