The battle for the Parthenon marbles 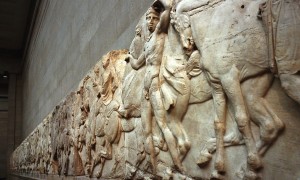 Frieze which forms part of the Parthenon marbles at the British Museum. Photograph: Graham Barclay/Getty Images

Greece has ruled out taking legal action in its battle to reclaim the Parthenon marbles from Britain. The unexpected move abruptly ends the legal battle in one of the world’s most bitter cultural disputes.

In an about-turn three months after Athens’ radical-left Syriza party assumed power, the new Greek cultural minister Nikos Xydakis said the route to retrieving the treasures lay in diplomatic and political channels and not international courts where outcomes were far from assured.

“The road to reclaiming the return of the sculptures is diplomatic and political,” he told Mega TV in a wide-ranging interview on Wednesday (The Guardian, on may 13, 2015). “You can’t go to trial on every issue, and in international courts the outcome is uncertain, things are not so easy.”

What was needed, he insisted, was “low-key persistent work” as the climate was gradually changing.

The minister was speaking barely 48 hours after receiving a 150-page dossier from Amal Clooney and fellow leading human rights lawyers at London’s Doughty Street chambers exhorting the Greek government to pursue legal channels immediately. The report, outlining the options Athens faced in its decades-long struggle to win back the fifth century BC carvings, described a “now or never” opportunity for Greece and advised it to take the British Museum to the international court of justice.

“The British adhere to international law,” said Clooney who co-authored the report with Geoffrey Robertson and Norman Palmer, British QCs regarded as pre-eminent experts in cultural restitution. “The Greek government has never taken advantage of this Achilles heel. You must take legal action now or you may lose the opportunity to do so due to future legal obstacles.”

Commissioned to write the report by the previous government when they visited Athens last October, the human rights lawyers argued that the spectacular artworks were an irrefutable part of Greek identity, history and culture.

The legal study suggested that Athens make a formal request for the marbles’ repatriation before submitting a legal claim to the international court at The Hague if the request was turned down as expected. In the event that the international tribunal rejected the claim, Greece should take the case to the European court of human rights, the lawyers said.

The volte-face was greeted with despondency and dismay by international campaigners. With Athens negotiating its worst crisis in modern times – and public finances at an all time low – many feared that Prime Minister Alexi Tsipras’ coalition of far-left radicals and rightwing populists had got cold feet. Isolated internationally, the government is currently haggling with international creditors over a cash-for-reform deal to keep the debt-stricken country afloat.

“Diplomatic and political efforts have been tried since the mid-1980s and made very little progress,” said Matthew Taylor, at the International Association for the Reunification of the Parthenon Sculptures. “To reject it so rapidly comes across as a something of a kneejerk rejection of any efforts by the previous administration rather than something that has been fully considered,” he said.

The new UK government was “completely unreceptive” to the very idea of returning the marbles, Taylor said. “This is evidenced by their rejection of UNESCO mediation [in the row] and by previous statements made by both David Cameron and the new secretary of state for culture John Whittingdale. I find it hard to believe they will change their minds on this in the next five years.”

Earlier this year, Xydakis roundly condemned the British Museum’s decision rejecting a Unesco offer to help resolve the dispute more than 200 years after the sculptures were controversially removed from Athens’ greatest temple, the Parthenon, by the seventh Earl of Elgin during his tenure as ambassador to the Ottoman Empire. The antiquities were acquired by the British Museum in 1816.

“We deplore the categorical refusal by the British of Unesco’s invitation to launch a mediation process over the Parthenon sculptures housed in the British Museum,” the cultural minister had said. “British negativism is overwhelming, along with its lack of respect for the role of mediators.”

Successive polls have shown that in contrast to their government, the vast majority of Britons would like to see the marbles returned to the place where they were carved more than 2,500 years ago.