Étienne Delaune was first a goldsmith. He even made a magnificent engraving that depicts, with striking realism, a goldsmith’s workshop.And it must be noted in this regard, that such representations of craftsmen at work were rare during the Renaissance.

This burin illustrates the proximity of the work between a goldsmith and an engraver: the tools used are identical and the production of prints ensures a comfortable supplement of income.

Delaune was a Huguenot goldsmith and engraver during the French wars of religion, and he worked for six months (from January to June 1552) at the Monnaie du Moulin, which King Henry II had just established on the Île de la Cité. For history, he was apparently dismissed for exorbitant salary claims, but other scholars suggest that his religious orientation may have been the real reason for his exclusion. Delaune continued his career in Paris before fleeing after Saint-Barthélemy’s massacre.

It was in exile, therefore, that Delaune spent the end of his life, continuing his career as an engraver and a medalist.The drawn work attributed to him has shifted to another name, Baptiste Pellerin. But the details of the collaboration between the two artists are still largely unknown, especially since Delaune also worked according to Jean Cousin, Luca Penni, Niccolodell’Abate, the Primatice or Rosso.He also copied the prints of Marcantonio Raimondi.

Delaune’s engravings have generously served as models for Limousin enamellers and Germanic silversmiths.For example, he did a lot of work on topics such as the work of the months (the ‘Great Suite of Months’), because his simplified motives guaranteed him immense success.The religious and profane theme allowed a great ease of execution, easily usable for ceremonial services.

The compositions that Delaune elaborated on civilian stained glass windows can be found, for example, in small glass panels that decorated the windows of Renaissance homes.But there are also cameos in agate, in concrete one realized by Alessandro Masnago, and which was intended for the court of Prague of Emperor Rodolphe II, where the bluish hue of agate allows to create in the back-plan a degradation of the sea and the sky on which stand out figures drawn in the second print of the Suite de l’Histoire de Diane de Delaune.

But in the same line, we can speak about dazzling writings, such as for example one that belonged to Francesco Maria II, Duke of Urbino between 1574 and 1626, of great beauty and that is only a prized object of the literate elites and/or princesses of the Renaissance.The writings contained everything necessary to write – ink, feathers, paper – but could also be used for reading, for example, the Bible.This is certainly the case of this one, whose religious iconography translated into ivory engraved several compositions of Delaune where one recognizes several episodes of the Old Testament.

There are also pendants that draw their inspiration from a series of grotesques engraved by Delaune before 1566 where we find an identical representation of Abel’s murder.

Delaune’s art has irrigated European creation in all areas of the decorative arts, and although the man was ultimately not the prolific draughtsman that was believed, his motifs can be found on woodwork as well as on table clocks.His is an exciting story of the circulation of images on the scale of Renaissance in Europe. 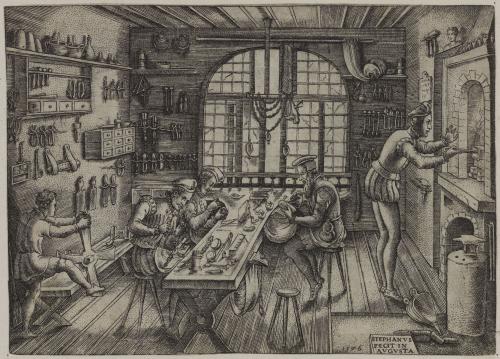