Françoise Gilot: The Woman Who Says No

Recently, on 10 June in The Guardian, the journalist Emma Brockes present an interview with Françoise Gilot, à propos of Malte Herwig’s book: The Woman Who Says No: Françoise Gilot on Her Life With and Without Picasso.

In her opinion, Françoise Gilot takes a stern line with interviewers, assuming they approach her with interest in only one thing: her affair with Picasso, which started 70 years ago and lasted a decade, during which time she had two children with the artist, before walking out. “When people know nothing about you except one thing, you have to talk about that,” she says, looking, at 94, much younger than her age.

In fact Gilot will talk expansively about Picasso, but not until she has established him as a single element in a remarkable life, evidence of which can be seen around her apartment. When coffee is served, in fine china and on a trolley wheeled in by a housekeeper in uniform, there is a sense we could be meeting at any point in the last 100 years. “My life is exactly the same here as it is in Paris,” says Gilot. “I live my own life in my own way. It doesn’t matter where I am.”

The irony is that, for most of her life, Gilot has been waiting for the world to catch up with her. She has always pointed out that it does her a great disservice as an artist to identify her as “Picasso’s lover” or “a friend of Matisse”.

Gilot started law school in her late teens, but before she could graduate, the Germans invaded Paris. She was briefly detained by the French police for the political act of laying flowers on the Tomb of the Unknown Soldier. As a result she was put on a list of agitators, some of whom were later executed by the Germans. For a while, Gilot had to go the police station every day and sign a form, something she now thinks was a ploy to intimidate her father. It didn’t help that she was a law student. “And so she dropped out, ostensibly for security reasons, but really, she says, so she could start her life as an artist.

And then came Picasso. They met in a cafe in 1943, when Gilot was 21 and Picasso was over 60. Gilot had been making a name for herself at art school and her work was already selling. This is one of her bones of contention with her artist peers; that so many of them are hopeless about business. Not Gilot. 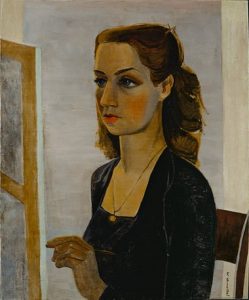 When, that first evening in the cafe, Gilot told Picasso she was a painter, he said “That is the funniest thing I’ve ever heard. Girls who look like you could never be painters.” Their relationship was, in the first instance, a great intellectual friendship, which had it not been for the war, she thinks would probably never have bloomed into romance.

Even Gilot’s parents were not that liberal, and so to begin with she concealed her involvement with Picasso, who for the entirety of their relationship was married to Olga Khokhlova. After a few years, Gilot moved in with him and they had two children, Claude and Paloma. I ask Gilot if it was a very passionate relationship and there is a long pause, after which she assumes a rather naughty expression. “Eventually,” she says. “But, you know, it was not what we call in French l’amour fou! Non! It was an intellectual dialogue as well. I could not say that it was a sentimental love. It was maybe an intellectual love, or a physical love, but certainly not a sentimental love. It was love because we had good reason, each of us, to admire the other.”

“I wanted a bit more affection, maybe; not love, but affection. So anyway, I was not satisfied.” She laughs, but it was a bitter ending and after she left, they were estranged, meeting only once more a year later, when she handed over the children for a visit. I ask her if leaving him was liberating: “No, because I was not a prisoner. I’d been there of my own will and I left of my own will. That’s what I told him once, before I left. I said watch out, because I came when I wanted to, but I will leave when I want. He said, nobody leaves a man like me. I said, we’ll see.”

In the years after Gilot and Picasso broke up, he tried to ruin her, bad-mouthing her across the whole industry. “So what!” she says. Gilot moved to America to try to escape Picasso’s orbit and, in spite of him, her work kept selling. And, in New York, she continues to paint every day, quickly, as she always has.

When has she come closest to defeat? “To defeat? Every day of my life. That’s true. I also come close to success. It is the same. Fifty-fifty.”