How Japan Inspired Monet, Van Gogh, and Other Western Artists

Claude Monet owned more than 200 Japanese prints and once told a critic, “If you insist on forcing me into an affiliation with anyone else … then compare me with the old Japanese masters; their exquisite taste has always delighted me.” Vincent van Gogh thought of Japan, a country he had never visited, as a paradise where everyone loved art and lived in brotherhood — a situation he hoped to replicate in his south-of-France studio. Mary Cassatt was influenced by flat, unmodulated Japanese woodblock prints — for her their depictions of mothers and children were new and freeing.

When US Commodore Matthew Perry landed in Edo Bay with a fleet in 1853, forcing Japan to sign trade agreements with Western nations, the country opened up after existing in almost total isolation for nearly two centuries. North American and European collectors, artists, and designers swiftly embraced the nation’s art and culture, which had the allure of being novel. Looking East, an exhibition organized by Boston’s Museum of Fine Arts, explores this craze, called Japonisme, and how it dramatically changed Western art.

The 170 or so pieces in the show illustrated the trademarks of Japanese art of the time -including scenes of urban life, landscapes in changing seasons, and bold color contrasts – in the process showing how they influenced Impressionists and Post-Impressionists, as well as designers like Louis Comfort Tiffany and architects like Frank Lloyd Wright.

Although the influence of Japanese art on the West is a familiar topic in art history, the exhibit was unique in showing examples of the two side by side, and in demonstrating the impact of Japanese culture not only on the French but on Americans as well, says Laura Allen, the Asian Art Museum’s curator of Japanese art. “Seeing the influence on designers and in the decorative arts extends the story further,” Allen said. 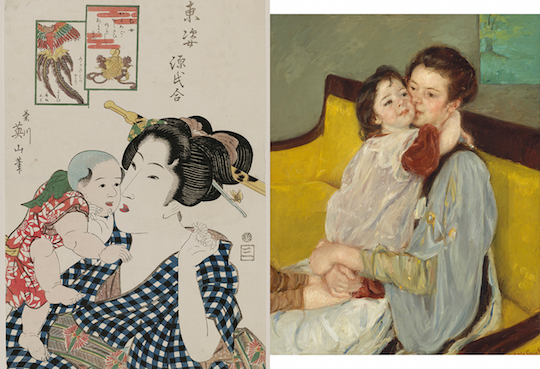 In Cassatt’s 1902 painting “Maternal Caress,” for instance, one can detect Japanese styles, such as dividing space into geometric units, reflected in the composition. And though certainly Western art history had plenty of paintings of mothers and children, the way Japanese artists showed intimate affection between the two was something different, said Helen Burnham, the show’s organizing curator.

“It would have been very unusual to show a mother bathing her child,” Burnham said. “People were looking for alternatives to Western art, and they found affirmation and inspiration of that path in Japanese art.”

Burnham further pointed to the energized figures (known as manga) in a sketchbook by Katsushika Hokusai; their expressive gestures are mirrored in the freedom of movement found in Henri de Toulouse-Lautrec’s and Edward Degas’s work, hung nearby.

Meanwhile, stylized portraits of Kabuki actors -which portray them close-up, with intense facial expressions and dark outlines-, influenced van Gogh. His 1888 painting “Postman Joseph Roulin” is flanked in the gallery by Utagawa Toyokuni I’s 1795 “Actor Sakata Hangoro III as Omi no Kotota” and Utagawa Kunimasa’s “Actor Matsumoto Yonesaburo,” painted in 1796. The van Gogh is by no means a copy, explained Laura Allen, the Asian Art Museum’s curator of Japanese art, but elements of the Japanese prints are apparent. 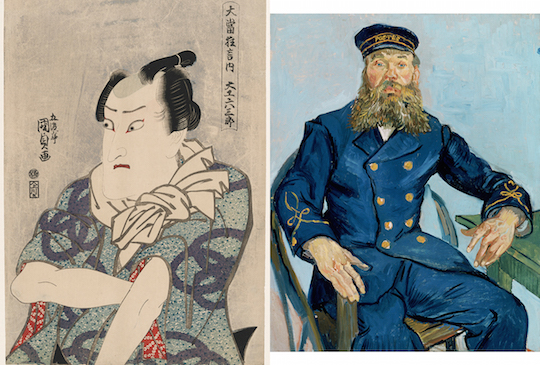 “You see it in van Gogh’s work in the flat background, and you see it in the angular position of [the postman’s] arms and his gnarled hands,” she said. “Another element from the prints is representing somebody who is an ordinary person — like with the woodblock prints of actors, not elevated people in Japanese society — which was affirming something French artists were already interested in.”

Van Gogh’s painting of the postmaster in his blue suit with brass buttons and a cap doesn’t directly mirror the portraits of the Kabuki actors that hang alongside it; the borrowing is subtle. But in some other works in the show, the use of Japanese style is more obvious — as in Monet’s 1900 “The Water Lily Pond,” which features a bridge nearly identical to the one in the painting alongside it, Utagawa Hiroshige I’s “Bamboo Yards, Kyobashi Bridge,” from his 1857 series One Hundred Famous Views of Edo.

“Monet’s water lilies are very familiar, but probably many people don’t know they were inspired by Japan. The bridge right next to Monet’s is the same shape — almost a direct copy,” said Jay Xu, the director of the Asian Art Museum. Juxtaposing the works of these different cultures invites us to look closely and think about how artists influence one another across borders. “Pairing Western artists and Japanese masters tells a powerful story about the global relevance of art.”