Prints and London buildings disappeared in the 1666 Great Fire

350 years ago, the Great Fire of London burned through 400 of the city’s streets. Matthew Green reveals, in The Guardian on 30 August 2016, the extraordinary structures lost in the blaze – from old St Paul’s to a riverside castle – and what survived, only to vanish later.

“Oh the miserable and calamitous spectacle!” wrote John Evelyn in 1666, “Mine eyes … now saw above 10,000 houses all in one flame.” The conflagration he witnessed from 2-5 September destroyed much of the medieval metropolis, swallowing 400 streets, 13,200 houses, 87 churches, and 44 livery halls.

Many of the City of London’s most iconic buildings were consumed: St Paul’s Cathedral, the Royal Exchange, Newgate Prison, Christ’s Hospital, and even Whittington’s Longhouse, one of the biggest public toilets in Europe, in the Vintry. Evelyn was aghast at the destruction of so much of the medieval center: “London was, but is no more”. 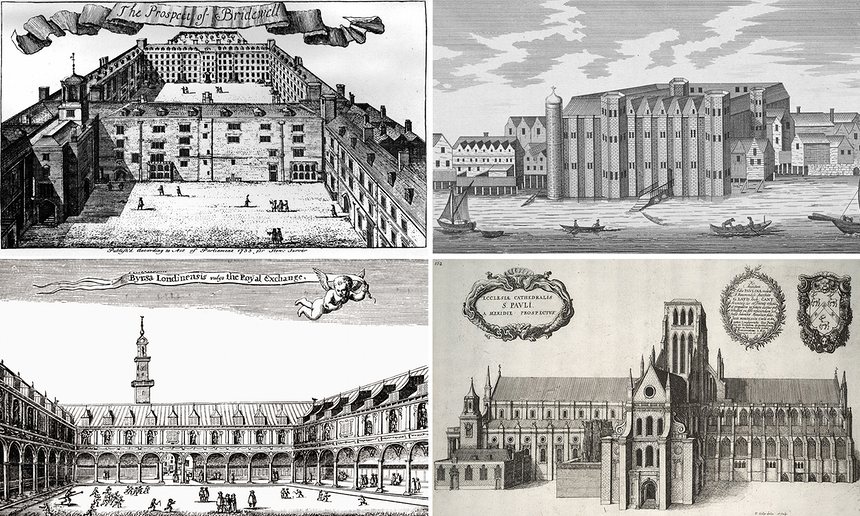 Yet this wasn’t exactly true. By the time of the fire, only a quarter of London’s population actually lived in the walled city, compared to three-quarters a century earlier. The growing eastern suburbs like Wapping and Stepney were left unscathed – as were much of Holborn, the Temple, western Fleet Street, the Strand, and the emergent squares of the West End.

Nor, as contemporary scorch maps reveal, did the fire even decimate the whole of the walled city: around four-fifths of it was destroyed (an area of 373 acres), leaving the north-eastern and some eastern parts (including the Tower of London) unaffected thanks to the gusty east wind.

It was here, outside the fire’s trail of destruction, that many extraordinary buildings survived only to be destroyed later on – whether by demolition works, other fires, or bombs. As we reach the 350th anniversary of the fire, it is fitting to commemorate not just the buildings destroyed in those four hellish days in September, but also some of those that survived, only to vanish later on.

Some landmark buildings destroyed in the Great Fire and that we know by Prints:

This riverside castle was built in the late 13th century, inheriting the name of a destroyed castle further to the west –the Tower of London’s lost twin– that had been built by the Norman Ralph Baynard after the Conquest. Many of Henry VIII’s wives lived here and, according to tradition, Richard of Gloucester was offered the crown here in 1483.

After several rebuilds, it appeared on the eve of the fire as a big, brooding stone structure with gabled projecting towers soaring from the Thames, a dock, thick curtain walls, central courtyard, and meaty turrets. The scene of lavish banquets and coronations, the castle was destroyed save for one round tower, later converted into a house, now vanished. Today, part of the site is occupied by a brutalist office block and commemorated by a blue plaque on Castle Baynard Street, just south of St Paul’s Cathedral.

Built in 1515-20 on the western bank of the River Fleet near Blackfriars, this lost inner-city palace was one of Henry VIII’s favorites. It was a large, rambling brick structure set around three courtyards with gardens and a private wharf. An imposing feature of the riverfront, it was probably the scene of Catherine of Aragon’s final meeting with the king in 1529 (over a quarrelsome dinner).

Under Henry’s son Edward VI, it became a poorhouse but was decimated on the third day of the Great Fire. The Fleet, contrary to expectations, proved no firebreak at all even though attempts were made to pull down the riverside houses.

Old St Paul’s was the wonder of medieval London. It was the fourth cathedral to stand on the site, built from Caen stone after the Norman Conquest, and finished in 1314. It was its monumental timber-and-lead spire that visitors noticed first (until it was struck by lightning in 1561), rising to 489 feet.

The remorselessly gothic exterior was much sterner than Christopher Wren’s neoclassical successor, with flying buttresses, pointed windows, and sharp turrets. As one of the biggest covered public spaces in London, a bazaar-like atmosphere prevailed inside, with lawyers tossing coins in the baptismal font, farmers’ wives selling fruit and ale, and apprentices shooting arrows at the jackdaws and pigeons in the rafters, smashing the holy windows. Riding high in the eastern wall was the famous rose window, bathing the high altar in kaleidoscopic light.

When St Paul’s burned down on the third day of the fire, a local thunderstorm broke out with forks of apocalyptic lightning radiating from the blazing building. Eventually, the roof melted, sending streams of molten lead pouring down Ludgate Hill “glowing with fiery redness” as people ran for their lives.

This vast, open-air trading piazza was the brainchild of the merchant Thomas Gresham. Christened the Royal Exchange by Queen Elizabeth I in 1571, it became the epicenter of England’s burgeoning trading empire, emitting onto Cornhill “an incessant buzz, like the murmurs of a distant ocean”. Along its colonnaded walks and finely pebbled courtyard, merchants from all over the world, customers and suppliers would meet twice a day to seal deals that would send ships to the four corners of the world.

It was a broad and a bell tower surmounted by a large grasshopper, the emblem of the Gresham family. Watching from niches above the colonnade were statues of all the English kings and queens since William the Conqueror.

The Great Fire swept through the Exchange on 3 September, filling the courtyard with “sheets of fire” and sending the kings and queens plummeting from their niches, smashing to pieces below. As a totem of England’s commercial prowess, the Exchange was swiftly rebuilt after the fire, opening in 1669. But this, too, was destroyed by fire in 1838, and the site is currently occupied by a third exchange.