Remembering Forgotten Female Printmakers from the 16th to 19th Centuries

In the 19th century, Henrietta Louisa Koenen, wife the Rijksmuseum Print Room’s first director, took a prescient interest in acquiring prints by women artists. These works date from the 16th century, such as a woodcut by Marie de’ Medici, daughter of Grand Duke of Tuscany Francesco I de’ Medici, to the 19th, with hand-colored engravings by Madame Alliot. In this moment the exhibition Printing Women: Three Centuries of Female Printmakers, 1570-1900 is opened at the New York Public Library’s Stephen A. Schwarzman Building, highlighting this collection for the first time since 1901. It’s a real homage to intelligence and anticipation’ sense of Mrs. Koenen. 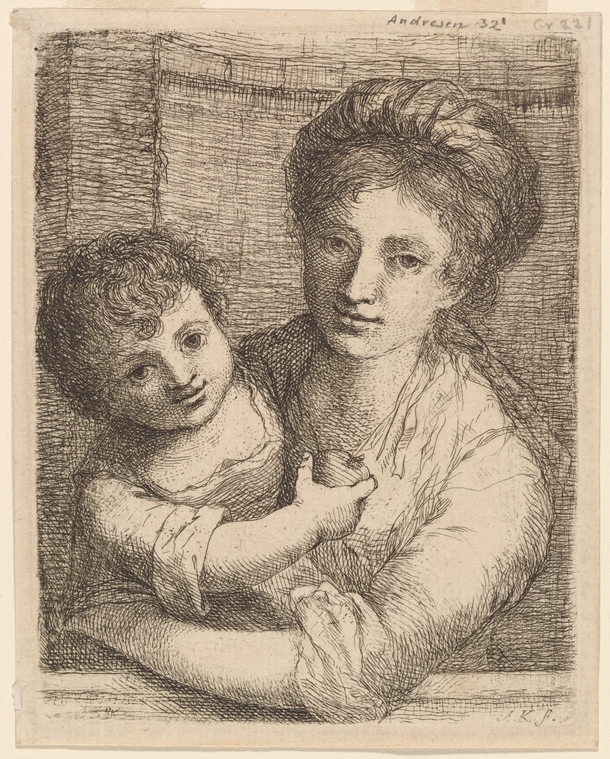 “Half-length Portrait of a Woman, with a Child Holding an Apple” (1763), etching

Madeleine Viljoen, curator of prints in the Miriam and Ira D. Wallach Division of Art, Prints, and Photographs, writes in an accompanying essay that “this group of engravings, etchings, woodcuts, and lithographs by female printmakers demonstrates women have been active in the medium for almost as long as its origins, in the early to mid-15th century.” She adds that while “more recent histories have rightly drawn attention to the longstanding contributions of women to the arts, Koenen’s collection, assembled well before such revisionist accounts were written, demonstrates that printmaking in particular was never just a male endeavor.”

Printing Women includes among its over 80 pieces some supplementary selections from the New York Public Library’s Spencer Collection and the Wallach Division. Taking over two hallways on the top floor of the NYPL’s flagship building on Fifth Avenue, the prints range from amateur experiments to professional works made for commercial sale, each arguing for women’s place in early modern printmaking history. Most of the artists were aristocrats, such as court painter to King Philip II Sofonisba Anguissola, granted the freedom by their position for artistic exploration, as long as they stuck to domestic and romantic scenes rather than grand histories and mythologies that were generally the realm of men.

For example, Princess Sophie of Saxe-Coburg-Saalfeld, Queen Victoria’s aunt, has a couple of idle 17th-century etchings that act as a sort of sampler of things she was drawn to at the age of 17, with horses, hairstyles, and flowers mingling on a single page. Queen Victoria later practiced printmaking herself, with quiet domestic scenes from her royal life. Other elite women were more adventurous with their subjects, like Maria Anna of Austria, daughter of Holy Roman Emperor Francis I and Empress Maria Theresa, whose 1772 aquatint shows men fighting a fire by a stream, the darkness of the night illuminated by the blaze.

Prints like these were generally shared among friends, although Printing Women has exceptions. Adélaïde Allou, whose biography has mostly vanished into the fog of history, has two 18th-century landscapes that were made for market, and there are women like Maria Sibylla Merian, who in the 17th century researched caterpillars and butterflies, illustrating their witnessed metamorphoses in The Wonderful Transformation of Caterpillars. In the New York Public Library exhibition, a copy of this historic book is open to a page featuring a rose with a small butterfly approaching. Alongside the other prints in black and white and color, there’s a variety of themes and skills that shows how women were working with the same new artistic media as men, even if there were limitations to their access and subjects.