In the wake of the Taliban’s destruction of the Bamiyan Buddhas of Afghanistan in 2001, a decision was made. The giant stone statues had been so pulverized by explosives that UNESCO said it was impossible to reconstruct them using original material. The statues’ niches were best left empty as a testament to the vandalism inflicted on the world’s patrimony.

There was nothing unusual in this. UNESCO’s decisions have long been guided by the 1964 Venice Charter for the Conservation and Restoration of Monuments and Sites, drawn up by the conservationists who also established Icomos (the International Council on Monuments and Sites), the advisory body to UNESCO on heritage matters.

Under the charter, only the “reassembling of existing but dismembered parts” (anastylosis) is permitted on site, with reconstruction being tantamount to theme-park fakery. The need for authenticity later became a defining issue in the consideration of potential World Heritage sites. Yet, quietly, steadily, this conservation consensus about the centrality of authenticity is being eroded. Mostar Bridge was awarded World Heritage status in 2005 after the span destroyed in 1993 during the Bosnian War was replaced in facsimile using new stone. The vandalized mud shrines of Timbuktu are similarly being rebuilt.

The deliberate targeting of cultural heritage has been one impetus for this change; the increased digital capacity to reconstruct monuments is another. The reconstruction by the Institute for Digital Archaeology (IDA) of an undersized Arch of Triumph from Palmyra received as much opprobrium from specialists as it did column inches in the popular press.
What to do about reconstruction, after the disasters of war or acts of God, is now the subject of internal debate among international heritage organizations. How will they avoid creating zombie monuments that are brought back from the dead with no authentic life of their own? 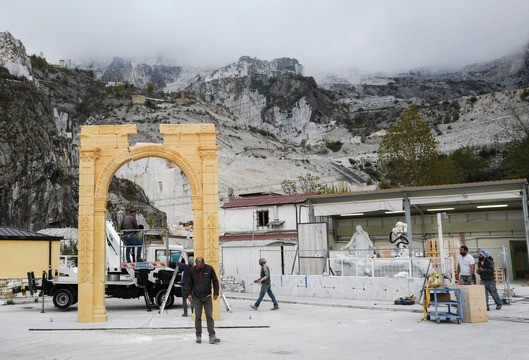 Francesco Bandarin, UNESCO’s assistant director general for culture, questions past approaches to reconstruction and authenticity. “The charter of Venice was written by art historians, not architects,” he says. “It was very strict, European stuff, a 20th-century Italian idea. This is why it never works for architecture­—we have to reinterpret it. Heritage principles have always been evolutionary.”

The seeds of this revisionism were sown some time ago. In 1994, after widespread destruction of monuments in the Bosnian War, the Nara Document on Authenticity was agreed at an international conference in Japan. The document called for the recognition of cultural differences in attitudes to reconstruction, and for sensitivity to the wishes of local communities. Occidental practices, such as the ritual rebuilding of Shinto temples in Japan, provided part of the impetus for the agreement, but it was also a riposte to the distortion of authenticity in nationalist-inspired rebuilding projects. “Deliberate destruction has created a new context,” Bandarin says.

Over the past year, the issue of rebuilding has been under discussion by UNESCO and Icomos, informed by events in Syria and Iraq. Some experts have suggested that a useful distinction might need to be made between “living cities”, where flexible responses to reconstruction are demanded, and places with “no community or users”, such as archaeological sites. “It’s an interesting shift,” Bandarin says, “but it is not totally new for the conservation profession to be looking at community as much as stones.” He points to the growing field of intangible cultural heritage—traditions, languages and art forms, for instance—that accompanies material culture.

But this openness to reconstruction marks a sea-change and Bandarin’s critique of the Venice Charter as “written by art historians, not architects” overlooks the fact that its founding committee included many experts with architectural training, such as the chairman Piero Gazzola, as well as archaeologists. Neither is the charter’s demand—for example, that all new work should be reversible—restricted to art historians or conservators. The Venice Charter has an antecedent in the 1931 Athens Charter for the Restoration of Historic Monuments and, before that, in the founding principles of 19th-century organizations such as the UK’s Society for the Protection of Ancient Buildings.

A key difference between then and now is that 21st-century technologies such as laser scanning and 3D printing appear to make faithful reconstruction unproblematic. The power of the digital means that paradox has ceased to be abstract and is becoming ever more real.

Even if accurate copies of buildings or monuments will soon be possible, should we be attempting this at all in the absence of original, authentic material? Rebuilding is a natural urge after a disaster but, even without questions of authenticity, the historical record can be distorted by the very act of rebuilding, in ways that can cause the original trauma to be forgotten rather than marked.

A third way of critical reconstruction—incorporating damaged elements as a record of what has happened in the past—has greater integrity. Bandarin agrees that David Chipperfield’s layered remodeling of the ruins of the Neues Museum in Berlin is “a total paradigm” of this approach. “The approach has to be pluralistic, and local communities listened to,” Bandarin insists.