The nocturnal in art

The nights are drawing in. Autumn evenings are getting duskier, mistier, and cooler. Early mornings are darker. Soon we’ll be living large parts of our lives under a nocturnal cloak.

As the dark deepens it unleashes imagination and stories of ghosts and witches; dreams and nightmares populate the night. Autumn is the time when they creep out of the lengthening shadows, ready for Halloween. As the world gets darker it also gets more interesting. That is what many artists find, anyway.

A timely exhibition at the Towner Art Gallery in Eastbourne (to see a specific article on The Guardian, 27 September 2016, by Jonathan Jones), surveys “the nocturnal” in art from the Romantic nights of Caspar David Friedrich and JMW Turner, through the dreamlike nights of Edvard Munch and Marc Chagall, to night scenes and thoughts by the likes of Louise Bourgeois and Peter Doig.

In Doig’s painting Echo Lake, which features in the show, a shadowy forest is reflected in dark water, with a strip of luminous shore bisecting the picture horizontally. Darkness is the realm of possibility and danger, folklore, fear and desire. A policeman stands on the edge of the lake, looking into the dark.

It is no coincidence that many of the artists listed above are from northern latitudes, where winter nights can be long and dark. Doig himself was born in Scotland and spent a lot of his youth in Canada. Friedrich, from northern Germany, and Munch, from Norway, are artists whose imaginations turn towards magnetic north, even towards the Arctic itself – and towards the night. In his 1893 painting and printing Vampire, for instance, Munch fleshes out one of the darkest of all night terrors.

The night and its strangeness are the north’s great gift to European art. Mediterranean art is sunny; it loves light. From the pure blues skies of Italian Renaissance paintings to the sunshine of Cézanne or Joaquim Mir or Joan Miró, glorious daylight fills the Mediterranean eye.

It took northern European artists to reveal the wonder of darkness. Geertgen tot Sint Jans’s painting The Nativity at Night, a very early Dutch masterpiece from about 1490, uses the inky darkness that surrounds Virgin Mary and her child to set off their illuminated holiness. This moving idea, of the nativity in the dark as a glowing moment of fragile humanity pitched against the shadows, would still be a powerful Dutch theme in the age of Rembrandt.

Yet northern artists were also driven to look beyond the consoling hearth light, into night’s most dreadful depths. The German Renaissance artist Hans Baldung Grien was obsessed with depicting and printing witches at their midnight Sabbaths. Centuries later in his painting The Night, the German expressionist Max Beckmann unveils a Weimar Berlin night of madness and depravity.

Vincent van Gogh, a northern artist who found himself in the south of France, painted one of the eeriest of all night-life scenes after he fell out with a cafe owner. He told the owner he was going to get revenge by setting up his easel in his cafe and portraying its sleazy atmosphere. The night drinkers and prostitutes enjoyed Van Gogh’s portrayal of their haunt, watching him paint it as a kind of performance art. The result is The Night Café, with its lurid green and red tones and sense of futility and desolation. Edward Hopper captures that same nocturnal desolation in his small-hours painting Nighthawks. 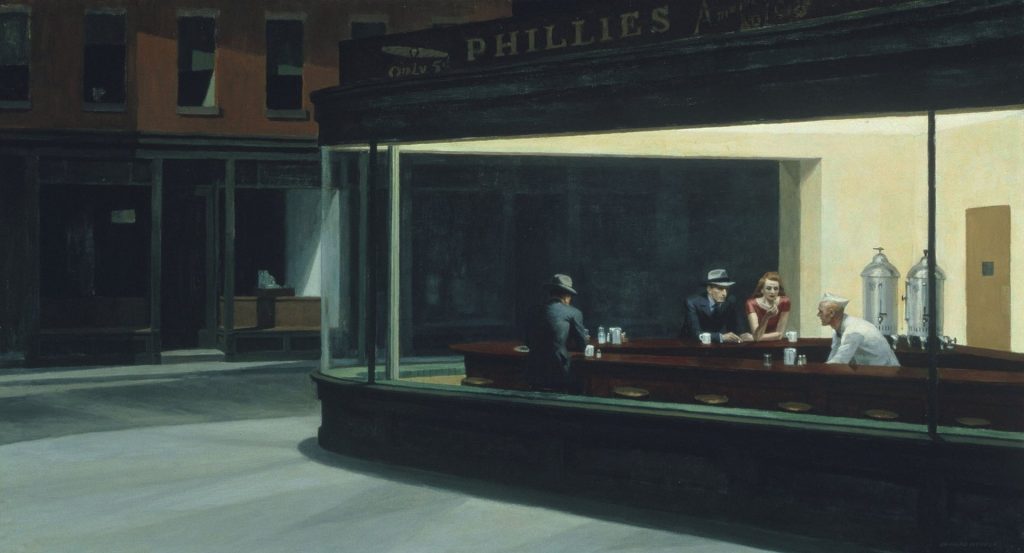 The night is full of terrors, from witches to loneliness, yet it is a labyrinth of mystery and beauty. The strangest and most marvelous art experience I have had this year, wrote Jonathan Jones, involved going into total darkness equipped only with a torch. After clambering over slippery, sharp surfaces and through narrow, claustrophobic apertures, we finally reached a pitch-black gallery where spotlights were turned on to reveal the art. This was not an installation at Tate Modern but a cave in the Pyrenees. Here, deep underground, ice age artists drew bison and ibex with charcoal 13,000 years ago. Why did the ice age artists explore such deep, dark places? Why is the oldest art in the world shrouded in permanent night? It has to be that our imaginations crave darkness. Only in the dark can we forget the banal distraction of daylit reality and enter a visionary realm of dreams. Art is a creature of the night or the night is the best atmosphere for art?