A sharp white crown raises from a hilltop in the West Bank, looking out across sun-scorched terraces of olive trees and sage bushes to the waters of the Mediterranean – a distant prospect that most Palestinians will never be able to reach. Seen from the valley below, this monolithic hangar could be the latest Israeli fortification, casting its beady eye over the surrounding Arab villages from the angular black windows slashed across its facade. The reality couldn’t be further from the truth.

This faceted box is the new Palestinian Museum, a $24m container for celebrating the history, culture and society of this nation, finally inaugurated on May, 11 after a 20-year gestation – with nothing inside it. 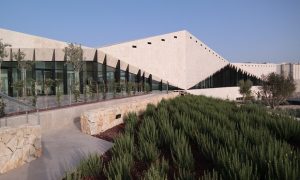 The Palestine Museum in Ramallah

“We thought it was better to celebrate the collective achievement of completing the building than delay any longer,” says Omar Al-Qattan of the Welfare Association (Taawon), an NGO backed mainly by Palestinian exiles, which funded the project.

Designed by Dublin-based architects Heneghan Peng, who won the project in an international competition in 2011, the building emerges from the landscape like a stealthy bunker, zig-zagging along the contours of the rocky site in precisely hewn planes of bright white Bethlehem limestone. Set at the top of a four-hectare plot, donated by the neighboring Birzeit University, the angular form casts ripples into the surrounding land, giving on to a sunken amphitheater and a garden of snaking terraces, planted with a cornucopia of native species that reads like a horticultural history of Palestine.

There are groves of almond and apricot, pomegranate and mulberry, followed by walnut, carob, fig and terebinth, ending with a blurry edge of pine and oak as the garden dissolves into the valley. Walking up the winding path, you get wafts of mint and sage, lavender and rosemary, before reaching the blinding terrace of the museum, where the stone facade lifts up like a curtain to draw you into the shady air-conditioned halls within.

A sequence of spaces that somehow evoke the dense urban forms of Palestinian towns squeeze you through narrow passages and tapering stairs, opening out into lofty halls where the angular geometry soars skywards.

At just 3,500 square meters, it is a relatively compact place, with one main exhibition hall, a couple of educational spaces and a small cafe. Nor will there be much to see when the museum has open to the public on 1 June. The institution’s founding director, Jack Persekian, resigned last year over artistic differences with the board and his opening show has been cancelled.

The museum’s new director, Dr. Mahmoud Hawari, comes from the University of Oxford’s Khalili Research Centre and is leaving a post at the British Museum to develop a more research-based program here. Although his team will be acquiring some artefacts, building a collection is not the priority. “This is definitely not a repository of national patrimony,” adds Al-Qattan.

For now, the main exhibition space, a windowless hall that rises up to a folded origami ceiling, displays odds and ends from the museum’s opening ceremony celebrating the construction process, including a collection of wheelbarrows and cement mixers, alongside enlarged prints of the architect’s drawings daubed with Arabic – selected answers to the question: “What is Palestine?” “Oxygen,” says one.  “A heavy load,” says another. “Goats scattered on a hillside,” reads a third.

Initially conceived in 1997 as a memorial for the 50th anniversary of the Nakba (the exodus that saw 700,000 Palestinians in 1948), the institution has since evolved into a more symbolic hub for the international diaspora, which now numbers around six million people around the world.

“Given all the travel restrictions, not many people will actually be able to come here,” admits Al-Qattan. Instead, an extensive online archive will supplement the program on site. “We see this place as a mothership with various satellites.” There are outposts planned in Amman, Santiago de Chile, Michigan and Beirut. This international mix was reflected in the construction itself. The glass curtain wall was trucked across the deserts of Saudi Arabia from Dubai, in a procession recalling an ancient caravan, while other pieces are imports from Europe.