Viollet-le-Duc: left in ruins or rebuilt?

Should old buildings be left in ruins or rebuilt? Does restoration bring beauty back to life or is it a betrayal of truth? We’re confronted with these questions more than ever as digital technology makes it ever more practical to repair or replicate lost masterpieces. From the possibility of resurrecting the tragic ruins of Palmyra to the more comedic tale of English Heritage upsetting Cornish antiquarians by carving Merlin’s face near Tintagel Castle, restoration is an electric issue.

I like ruins. I grew up a long way from London’s art galleries but very close to some of the finest medieval castles in Europe. The raw, real stone of Conwy Castle is to my eyes more moving than a tarted up “restored” castle might be. Keep ruins as they are, I say don’t rebuild them. Or at least that’s what I thought before I had a close encounter this summer with the genius of Eugène Viollet-le-Duc.

To climb the stone spiral staircase hidden inside the walls of Notre Dame in Paris and emerge onto a gothic parapet high above the river Seine is to enter Viollet-le-Duc’s wondrous world. Grimacing gargoyles – or chimeres – crouch and squat all around you, their bulging stone eyes gazing on the city far below. 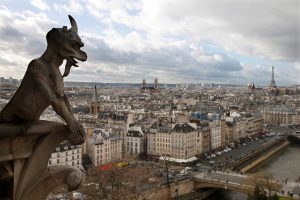 What medieval mind invented these hideous yet pitiable monsters? In fact, they are not medieval at all. The spectacular gargoyles that swarm the heights of Notre Dame sprang from the mind of Viollet-le-Duc, who could not resist adding his own demonic touch when restoring this great building in the 19th century. Was it a crime against taste or truth? No, it was an act of love and imagination.

Today Viollet-le-Duc’s additions to Notre Dame –which go way beyond the gargoyles; there’s barely a detail of its fabric he didn’t restore– are inseparable from its genuine medieval glory. He is, in a way, the man who invented the middle ages. Our sense of the strangeness and mystery of medieval art owes a staggering debt to this visionary architect.

I didn’t intend my summer trip to France to be a quest for the genius of Viollet-le-Duc. It just turned out that way, because we happened to visit a few medieval monuments all of which turned out to have been creatively restored by this passionate lover of all things gothic.

Where would movies such as Robin Hood Prince of Thieves and countless fantasy board games be without the perfectly preserved medieval city of Carcassonne? This real life film set in southwest France has shiny slate roofs on its lofty turrets and a double ring of walls inside which huddle half timbered houses in a labyrinth of narrow streets. Yet as you negotiate the souvenir shops and crêperies and walk the romantic walls, the past you’re reliving is more complex than it looks.

This town is Viollet-le-Duc’s masterpiece. He started work on it in 1851 and was still making interventions there when he died in 1879. Make no mistake. Carcassonne is real, a superb example of medieval fortification with a dramatic history – it was one of the strongholds of Cathar heretics besieged in the Albigensian crusade. Yet by 1850 it was in a parlous state, unsafe and unloved. Viollet-le-Duc resurrected the past here with a sympathetic imagination that is still infectious today. The towers of Carcassonne resemble the imaginary medieval world of Game of Thrones, or a Book of Hours miniature comes to life.

Viollet-le-Duc occupies a place in French culture a bit like Walter Scott and John Ruskin in Britain, but he had better material to work with because France was the greatest kingdom of medieval Europe, the source of every idea in medieval art. It also experienced the French Revolution, which violently cut it off from that past.

The achievement of Viollet-le-Duc was to reconnect France with its own soul. He got some things wrong. At Saint-Sernin in Toulouse I marveled at the purity of one of world’s greatest Romanesque churches. Yet it had to be saved by recent restorers from Viollet-le-Duc’s overenthusiastic reworking. As for gargoyles, it’s a relief to discover in the Musée des Augustins in Toulouse these creatures really do originate in medieval art. It has a row of these fantastic howling monsters that date from the 13th and 14th centuries. Their hellish brutality is starker and scarier than Viollet-le-Duc’s gargoyles at Notre Dame. Yet the very image of Paris is shadowed by his winged imagination. I would not have it any other way.