Why US universities are investing in their art museums

Over the past decade, many university leaders and donors have come to the same conclusion: investment in the arts is essential to building a competitive institution in an increasingly global world. This year, around half a dozen new museums and arts centers are opening on campuses across the country, from Columbia University in New York to Rice University in Texas. They come on the heels of recently completed projects at Stanford in California, Harvard in Massachusetts and Yale in Connecticut.

This multi-million-dollar investment in culture is fuelled by several factors: administrators’ recognition that the arts can promote nimble thinking, student demand and donor co-operation. “Stanford made this analysis that the arts and creativity were going to be absolutely vital to the next generation of problem solvers, of people who could understand different perspectives and what it means to bring something new into the world,” says Matthew Tiews, the university’s associate dean for the advancement of the arts.

Since 2006, Stanford has added three buildings—including a museum for the coveted Anderson Collection of post-war US art—to create an arts district at the front door of its campus. These facilities support a new requirement that every student take at least one course in creative expression. They can choose from more than 300 classes across departments, from studio art to graphic animation. “We’re seeing significant numbers of students who aren’t arts majors taking more than six of these classes and, for some, it’s causing shifts in their trajectory,” Tiews says in an interview on The Art Newspaper (by Hilarie M. Sheets, published on 5 January 2017)

The rising demand is leading schools that have traditionally marginalized the arts to enter a new kind of arms race. Princeton University in New Jersey “was losing students to some of our rival universities because we didn’t have the visibility in the arts that we should”, says Michael Cadden, the chair of the Lewis Center for the Arts. Princeton has 30% to 40% more students studying the arts than it did ten years ago, according to Cadden.

Arts facilities can have a tangible effect on the kind of talent schools attract. In the decade since Duke University in North Carolina opened the Nasher Museum of Art, it has seen a steep climb in arts portfolios submitted by prospective students, from 980 in 2006 to more than 2,800 last year. Scott Lindroth, the university’s vice provost for the arts, says that the Nasher “demonstrated very concretely that the arts could play an important role in shaping the cultural climate and the research on campus”.

Schools now think of the arts less as a peripheral extracurricular activity than as an opportunity for innovative collaboration. At Stanford, for example, medical students examine the Rodin sculptures at the Cantor Arts Center to learn about conditions that afflict the hand. Meanwhile, Rice is due to open the Moody Center for the Arts next month, an exhibition-cum-interdisciplinary laboratory space. “I’ve learned how important visual imagination is to thinking about science and engineering,” says David Leebron, the university’s president.

Schools that had not previously cultivated arts giving have found new donors stepping up. After the financier David Rubenstein offered $25m to fund Duke’s arts centre, six other alumni finished the job. “Donors saw an opportunity to break new ground in developing programs that had not been traditionally emphasized at Duke,” Lindroth says.

At universities where the arts have always been a calling card, support has flowed more easily. Virginia Commonwealth University (VCU) in Richmond, Virginia, has had the country’s top ranked public graduate school of art and design for years. But it lacked a museum until the city’s philanthropists came together to fund the Institute for Contemporary Art (ICA), due to open in the autumn. “There was a lot of pressure from the community to have a world-class art facility and to hire a major architect because they knew it was going to bring prestige and attention,” says Lisa Freiman, the director of Steven Holl constructor. 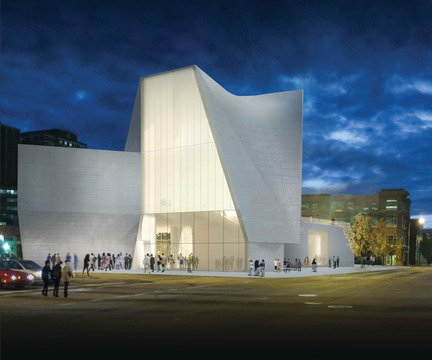 At Columbia—another university with a highly ranked MFA program but no suitable space to showcase student work—the planned Lenfest Center for the Arts has been marketed as an olive branch to the community. As the school prepares to open a controversial satellite campus uptown, which has been criticized for buying out local businesses, the centre represents an effort “to be a good neighbor”, says Carol Becker, the dean of the Columbia School of the Arts. “A big part of the mission of the building is to be a hub at the centre of the new campus, where people will be welcomed into an exhibition or concert or festival. Nothing can invite people in like the arts.”

April
Columbia University’s Lenfest Center for the Arts in New York: including the Wallach Art Gallery and flexible exhibition, performance and screening spaces.