From Paris to New York. Engravings of the Gelonch Viladegut’s Collection

“From Paris to New York. Engravings of the Gelonch Viladegut’s Collection” 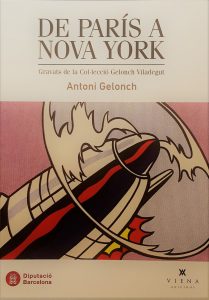 Catalogue of the same exhibition that brings together some of the most emblematic works of the engraving of the 19th and 20th centuries proceeding from the fund of the Gelonch Viladegut’s Collection.

The texts and the selection of catalog made by Antoni Gelonch.

“The 19th and 20th centuries were protagonists of a great evolution in the world of the arte and on the art’s market.
The 19th century was the period of the permanent revolution; a time in which everything evolved, in that everything was in movement and the new ways were looked.
In other side, the history of the art in the 20th century is a history without end. Everything reveals itself and re-reveals itself and the artists want to eat up the life and the world to bites.
These two centuries saw also changes of capital. They were witnesses of how the art’s world and the art’s market passed from Paris to New York.
The book shows the different artistic movements that emerging during these two centuries and there presents graphical works of the most important artists of this period”.

Edited by Diputació de Barcelona and Viena Edicions.
Of sale in bookshops, in the different headquarters where one will present the exhibition and in the same publishing house.