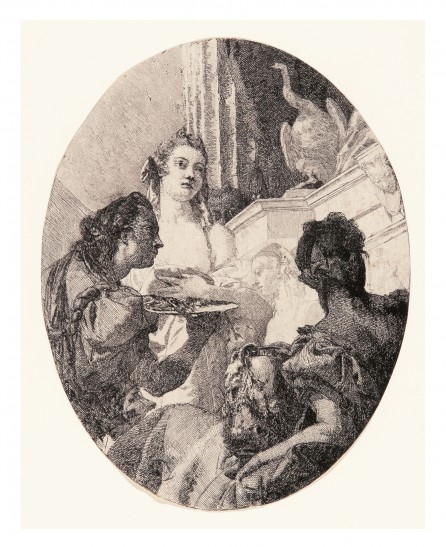 Giovanni Domenico Tiepolo (August 30, 1727 – March 3, 1804) was a Venetian painter and printmaker in etching. He was the son of artist Giovanni Battista Tiepolo and elder brother of Lorenzo Baldissera Tiepolo.

Domenico was born in Venice, studied under his father, and by the age of 13 was the chief assistant to him. He was one of the many assistants, including Lorenzo, that transferred the designs of his father (executed in the ‘oil sketch’ invented by the same). By the age of 20, he was producing his own work for commissioners.

He assisted his father in Würzburg 1751-3, decorating the famous stairwell fresco, in Vicenza at the Villa Valmarana in 1757, and in Madrid at the palace of Charles III from 1762-70.

His painting style developed after the death of his father in 1770, at which time he returned to Venice, and worked here as well as in Genoa and Padua. His painting, though keeping the decorative influence of his father, moved from its spacial fancy and began to take a more realistic depiction. His portraits and scenes of life...

Way of the Cross. third Station