Night (of the series Four Times of the Day) 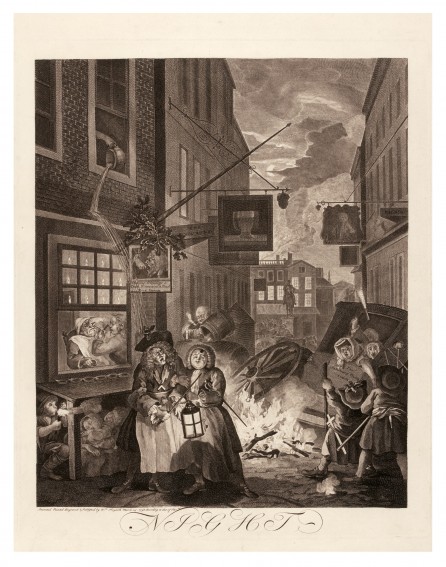 Title: Night (of the series Four Times of the Day)

William Hogarth (10 November 1697 – 26 October 1764) was an English painter, printmaker, pictorial satirist, social critic and editorial cartoonist who has been credited with pioneering western sequential art. His work ranged from realistic portraiture to comic strip-like series of pictures called “modern moral subjects”. Knowledge of his work is so pervasive that satirical political illustrations in this style are often referred to as “Hogarthian.”

William Hogarth was born at Bartholomew Close in London. In his youth he was apprenticed to the engraver Ellis Gamble in Leicester Fields, where he learned to engrave trade cards and similar products. Young Hogarth also took a lively interest in the street life of the metropolis and the London fairs, and amused himself by sketching the characters he saw. Around the same time, his father, who had opened an unsuccessful Latin-speaking coffee house at St John’s Gate, was imprisoned for debt in Fleet Prison for five years. Hogarth never spoke of his father’s imprisonment.

He became a member of the Rose and Crown Club, with Peter Tillemans, George Vertue, Michael Dahl, and other artists...