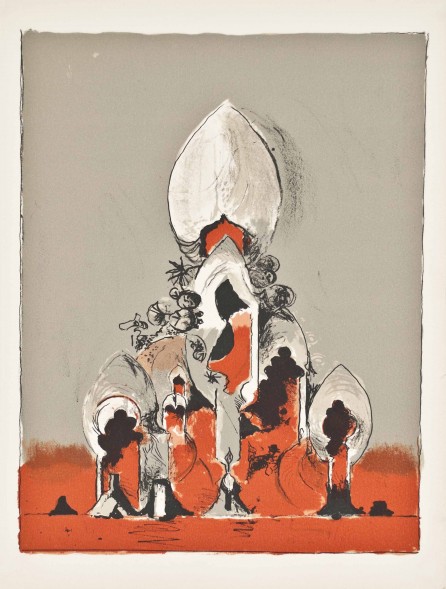 Title: San Lazzaro and his friends

He was born in Streatham, London, attending Homefield Preparatory School, Sutton. He was then educated at Epsom College, Surrey and Goldsmiths, University of London. He worked as an engineer at the Midland Railway Works at Derby before studying engraving at Goldsmiths.

His early prints of pastoral subjects show the influence of Samuel Palmer, largely mediated by the older etcher, F.L. Griggs. He did not begin to paint in earnest until he was in his 30s, following the collapse of the print market in 1930 due to the Great Depression. These pieces are mainly landscapes, which show an affinity with the work of Paul Nash. Sutherland focused on the inherent strangeness of natural forms, and abstracting them, sometimes giving his work a surrealist appearance; in 1936 he exhibited in the International Surrealist Exhibition in London.

He also took up glass design, fabric design and poster design during the 1930s, and taught at a number of London art colleges. In 1934 he first visited Pembrokeshire and was profoundly inspired...