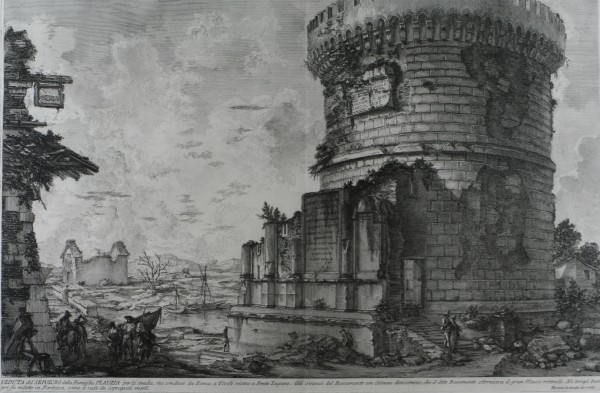 Giovanni Battista (also Giambattista) Piranesi (4 October 1720 – 9 November 1778) was an Italian artist famous for his etchings of Rome and of fictitious and atmospheric “prisons” (Carceri d’Invenzione).

Piranesi was born in Mogliano Veneto, near Treviso, then part of the Republic of Venice. His brother Andrea introduced him to Latin and the ancient civilization, and later he studied as an architect under his uncle, Matteo Lucchesi, who was Magistrato delle Acque, a Venetian engineer who specialized in excavation.

From 1740 he was in Rome with Marco Foscarini, the Venetian envoy to the Vatican. He resided in the Palazzo Venezia and studied under Giuseppe Vasi, who introduced him to the art of etching and engraving. After his studies with Vasi, he collaborated with pupils of the French Academy in Rome to produce a series of vedute (views) of the city; his first work was Prima parte di Architettura e Prospettive (1743), followed in 1745 by Varie Vedute di Roma Antica e Moderna.

From 1743 to 1747 he sojourned mainly in Venice where, according to some sources, he frequented Giovanni Battista Tiepolo....