Founded in 1217 by St Francis of Assisi, in the middle of the Fifth Crusade, the Custody of the Holy Land is a branch of the Franciscan monastic order that has operated in Jerusalem continuously for more than eight centuries. Their mission has been to preserve the places in the […]

Why US universities are investing in their art museums

Over the past decade, many university leaders and donors have come to the same conclusion: investment in the arts is essential to building a competitive institution in an increasingly global world. This year, around half a dozen new museums and arts centers are opening on campuses across the country, from […]

Mikhail Piotrovsky, the director of the State Hermitage Museum in St Petersburg, is optimistic that museum loans between Russia and the US can begin again soon. Piotrovsky spoke to The Art Newspaper (January 2017) as the US Senate voted to pass new legislation that will protect works of art on […]

Shaking up Italy’s Most Popular Museum

While the Uffizi has to contend with crowd control (see the precedent article published in this Blog), other Italian museums have exactly the opposite problem. Near the Uffizi, in Florence, is the Bargello Museum, renowned for its Renaissance sculpture and one of the best collections of Islamic art in Italy. […]

Eike Schmidt is the new director of the Uffizi Gallery here and the first non-Italian to hold the job. A difficult job, because “It’s like playing multiple chess games at the same time,” Mr. Schmidt said. Last year, the Uffizi, Pitti Palace and Boboli Gardens merged into one entity, and […]

A sharp white crown raises from a hilltop in the West Bank, looking out across sun-scorched terraces of olive trees and sage bushes to the waters of the Mediterranean – a distant prospect that most Palestinians will never be able to reach. Seen from the valley below, this monolithic hangar […]

On 4 February, 1816 an Irish peer, Richard, 7th Viscount Fitzwilliam of Merrion, died aged 71 – to the benefit of Cambridge University. He left a fabulous collection of works of art including paintings by Titian and Veronese, wonderful books, illuminated manuscripts, handwritten scores by some of the greatest composers, […]

Museums are part of the Britain’s north-south division?

Joseph Wright of Derby’s painting this piece, “A Philosopher Lecturing on the Orrery” may look familiar for British people. It often appears on book covers, regularly flashes up in TV documentaries, and with good reason. No painting captures the wonder of science better. Adults and children are gathered by candlelight […] 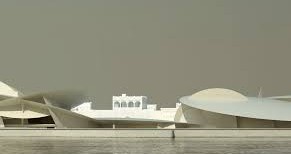 How build an Art Museum in Qatar…

Sheikh Saud bin Mohammed al-Thani, a Qatari royal relative who was one of the world’s most prolific and idiosyncratic buyers of art, antiquities, jewelry, vintage cars and dinosaur fossils until corruption charges left him in debt, died on Nov. 9 at his home in London. He was said to be […]